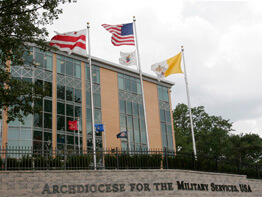 WASHINGTON – When Archbishop Edwin F. O’Brien approved plans in 2005 to move the military archdiocese’s headquarters from its location at The Catholic University of America’s Theological College, he and his staff hoped a new building would raise the profile of an archdiocese that serves one of the Catholic Church’s largest populations.

The end result was moving in March to a renovated 30,000-square-foot building just blocks away from the Catholic University campus in Washington.

The U.S. Archdiocese for the Military Services, headed by Archbishop O’Brien, serves the spiritual and pastoral needs of more than 1.2 million people. It serves military personnel and their families at 220 installations in 29 countries, patients at 172 Veterans Affairs Medical Centers and federal employees serving in 134 countries. Geographically, the archdiocese is the largest in the church.

Staffers hope having a new building will raise the profile of the archdiocese and give them an identity they say has eluded them since the headquarters moved from New York to the Washington area in 2001.

“It’s a major step forward for us,” Archbishop O’Brien said in an interview with Catholic News Service June 4. “It gives us a major identity and roots.”
WASHINGTON – When Archbishop Edwin F. O’Brien approved plans in 2005 to move the military archdiocese’s headquarters from its location at The Catholic University of America’s Theological College, he and his staff hoped a new building would raise the profile of an archdiocese that serves one of the Catholic Church’s largest populations.

The archdiocese’s staff spent years bouncing from one rented office space to another, finally ending up near Catholic University’s campus, tucked away in Theological College in tight quarters and unnoticed by the public.

“A lot of the Catholics in the military are not aware of the archdiocese,” said Julia Rota, its director of communications. She said that along with the new building, the military archdiocese has revamped its magazine, AMS News.
As for the building, “it’s much more functional,” said Father James Dixon, vicar general. “We have room to grow and expand.”

The five-story building includes a chapel, living quarters and more than 20 offices for the staff of 30. The new space has been put to good use by the staff that oversees the archdiocese’s 1.4 million sacramental records.
“The layout is better,” said Frank Calandra, director of the sacramental records. “I like the location, comfort and environment.”

When designing the building, Father Dixon said the archbishop decided not to splurge and focused only on remodeling an existing building. It is “bare bones,” he said.

“It’s not lavish,” said Bill Kirst, chief financial officer for the archdiocese. “You don’t see any fancy chandeliers,” he said.

Kirst said renovating the building cost $5.5 million. The archdiocese was able to purchase the building at a discount because it exchanged the property for another one it owned in Washington.

Funding came exclusively from gifts and donations, which were largely part of an $8 million fundraising campaign, Kirst said. The capital campaign has already raised $7.6 million of its goal.

Originally constructed in the 1960s, the building served as housing for members of the Society of the Divine Word who were taking classes at Catholic University.

“We literally gutted this building,” Kirst said. “It was like a college dorm.”
Father Dixon said there are misconceptions as to how the archdiocese pays its bills: Many assume that it is supported by the military or the Catholic Church, but its ministries rely on donations.

He is hopeful that by raising the profile of the archdiocese with its news headquarters, people will better understand its work.

“This is a unique diocese” because it “covers the whole world,” he said.