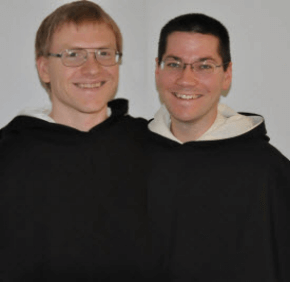 By Catholic Review staff
Men from Bel Air and Hagerstown were among six men ordained transitional deacons for the Dominican Order March 9 at the Dominican House of Studies in Washington, D.C.
Auxiliary Bishop Martin Holley of Washington ordained the men, who included Dominican brothers Leo Checkai and Peter Martyr Joseph Youngwirth. Brother Checkai is from St. Margaret in Bel Air, and Brother Youngwirth is from St. Mary in Hagerstown.
According to statements from the order, both men entered the Dominican Order in 2007 at St. Gertrude Priory in Cincinnati, Ohio, and were assigned to the Dominican House of Studies in 2008 to prepare for the priesthood. They professed lifelong vows to the order in 2011.
Brother Youngwirth attended Maria Goretti High School in Hagerstown. Both men attended the University of Maryland prior to entering the order.
Along with their classmates, they plan to be ordained to the priesthood next year.
The Order of Preachers, commonly called the Dominicans, was founded in France in 1216 by St. Dominic de Guzman. The Dominican way of life consists of the vows of poverty, chastity and obedience, with a focus on study as the basis for preaching.
Copyright (c) April 2, 2013 CatholicReview.org
PrevNext