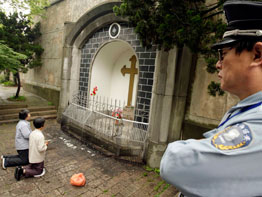 SHANGHAI, China – Chinese pilgrims, mainly from the Shanghai Diocese, read aloud Pope Benedict XVI’s “Prayer to Our Lady of Sheshan” as they celebrated the Sheshan Marian shrine’s feast day on the outskirts of Shanghai.

Around 2,500 pilgrims packed the shrine’s minor Basilica of St. Mary May 24, the day of prayer for the church in China that the pope called for in his June 2007 letter to mainland Catholics, reported the Asian church news agency UCA News.

Auxiliary Bishop Joseph Xing Wenzhi of Shanghai was the main celebrant at the basilica Mass. The pope’ prayer, released by the Vatican May 16, was read aloud twice during the Mass, once unexpectedly, priests later confirmed.

Bishop Xing told UCA News after the Mass that he believed local Catholics would soon memorize the prayer, despite its length, as they love every word written by the pope.

He recalled that when he showed the Chinese version of the prayer, taken from the Internet, to Bishop Aloysius Jin Luxian of Shanghai, the 92-year-old prelate immediately responded, “Print it.” The diocese printed 2,000 pilgrimage booklets with the pope’s prayer and his coat of arms.

During remarks at the beginning of Mass, Father Raphael Gao Chaopeng pointed out that Pope Benedict made May 24 special this year by designating it World Day of Prayer for the Church in China. This shows “we are no longer an orphan but a family member in the universal church,” said the priest, who teaches at Sheshan Seminary, at the foot of the shrine hill.

He also asked the congregation to pray for the success of the Beijing Olympics in August and for the victims of the deadly earthquake May 12 in southwestern China’s Sichuan province.

“God is the suffering victim,” he told them.

As Father Gao quoted the first few lines of the papal prayer to conclude his remarks, the congregation followed and continued reading the whole prayer aloud. This had not been planned, priests later said. The prayer was recited again before the final blessing.

A Shanghai priest told UCA News he felt the imagery of the prayer expresses that “Our Lady has dedicated her son Jesus as a hope to Chinese Catholics.”

A young Catholic from Shanghai, who identified himself only as Xu, told UCA News he felt grateful the pope wrote the prayer, which he called “a glory for Shanghai Catholics.” Xu was one of a dozen Catholic youths from Yangpu parish granted permission to attend the Mass May 24.

This year’s attendance was no more than one-third that of previous years, because the government and government-sanctioned church bodies in Beijing had dissuaded pilgrimages to Sheshan in May, citing security concerns. The government estimated 200,000 pilgrims would come for the feast day after the pope called for the special prayer day.

The half-day celebration started at 8:30 a.m. at the “kiosks of the three saints” outside the small church halfway up the hill. Bishop Xing led the crowd in praying to St. Joseph, Mary and the Sacred Heart of Jesus. Then the whole group accompanied the statue of Our Lady of Sheshan in a slow procession uphill to the basilica, where about 60 priests concelebrated the Mass, with ailing Bishop Jin sitting at the side of the altar.

Among the pilgrims were approximately 100 Catholics from the Wenzhou Diocese, in neighboring Zhejiang province, who received government approval in advance and served as the choir.

Local Catholics were unhappy over the tight security measures, which included about 2,000 police officers and government officials stationed around the shrine and surrounding area.

One laywoman commented, “With so many police around, it seems the Blessed Mother was imprisoned.”