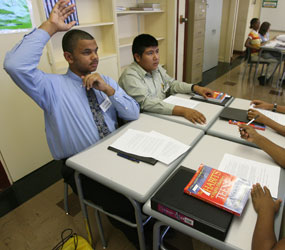 Cristo Rey Jesuit High School was launched two years ago, providing a rigorous curriculum for at-risk children and supplying them with the support to master it.

Many of its first students, now juniors, might not have remained at the East Baltimore school if not for volunteer tutors.

Many of those helpers are students at Loyola College in Maryland, no surprise, given its Jesuit identity. Students from Maryvale Preparatory School and the University of Maryland Baltimore County also make their way to Cristo Rey Jesuit, but not everyone who donates time is coming from a classroom themselves.

“We averaged 80 volunteer tutors a week after school last year,” said David Haddad, the volunteer coordinator at Cristo Rey. “We’ve got young students, retired college professors and CEOs, the best of both worlds.”

The volunteer force has included retirees from Moffat & Nichol, an international engineering firm with a branch office in Baltimore, just down Boston Street from Cristo Rey Jesuit. The school attracts professionals between jobs, and others just wanting to make a difference.

Whatever the background, their presence is vital.

“We’ve got a college prep curriculum, and unfortunately, a lot of our students do not come prepared for it,” Haddad said. “They’re plenty smart, but some just don’t have the background and have a lot of catching up to do.”

Those who have fallen behind have been required to remain after school to receive support from tutors, who also keep other students on track.

Haddad, 66, grasps where some of the veteran tutors are coming from.

He was vice president for academic affairs at Loyola College for eight years, and was its interim president before the 2005 installation of Jesuit Father Brian F. Linnane. Haddad’s retirement in 2007 dovetailed perfectly with the opening of Cristo Rey Jesuit.

“I was trying to decide what to do next, and it needed to be something worthwhile,” Haddad said. “Father Swope was saying Masses at St. Francis Xavier (in Hunt Valley), where I’m a parishioner. He asked me to be the volunteer coordinator, and here we are.”

Haddad oversees more than just tutors at a school where students are immersed in corporate internships.

“The volunteers don’t just help out after school,” Haddad said. “We’ve got a writing lab, a math lab, a clothes closet where donations are sorted so students can have the appropriate attire for internships.”

Cristo Rey Jesuit volunteers must complete an application process and the Archdiocese of Baltimore’s STAND training.

“A community with volunteers is always special, we’re bringing in wonderful people,” Haddad said. “They wouldn’t be down here if they weren’t committed.”

Information about how to volunteer at Cristo Rey Jesuit High School can be found at http://www.cristoreybalt.org/