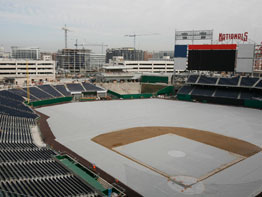 WASHINGTON – Converting a baseball stadium into a cathedral for a day has been a monumental task.

“We’re doing everything possible to turn the stadium into a holy and beautiful place,” Father Mark Knestout, director of the Archdiocese of Washington’s Office of Worship, told the Catholic Standard, the archdiocesan newspaper.

“People bring the idea of holiness to the Mass by bringing their faith. The Lord told us, ‘Where two or three are gathered in my name, I am there,’“ he said in an interview a couple of weeks before Pope Benedict XVI’s April 17 Mass.

The setup of the stadium for the Mass was to begin after a Washington Nationals’ afternoon home game April 13.

Planning for the Mass, the first nonbaseball event at the newly constructed stadium, began shortly after the papal visit was announced in November 2007, according to Father Knestout.

Efforts quickly got under way to accommodate one pope, 14 cardinals, 250 bishops and 1,300 priests, as well as a congregation of more than 45,000 laypeople.

Arranging the music, including a preconcert and prelude, was aimed at helping “shift people’s focus and attention onto the liturgy,” he said. A 250-voice papal Mass choir, a 175-voice children’s choir, an 80-voice gospel choir and a 65-voice international choir rehearsed for weeks leading up to the Mass.

The altar, papal chair, pulpit and lectern – designed by John-Paul Mikolajczyk and Ryan Mullen, graduate architecture students at The Catholic University of America, and built by Deacon David Cahoon, a carpenter, with the help of other craftsmen – “reflect a sanctuary,” Father Knestout said.

The 10-by-4 foot altar has a solid wooden top with a series of metal decorative arches, a design inspired by Mullen’s hometown church in Manchester, N.H. The pulpit is adorned with images of the Bible and the Holy Trinity. The tall back of the papal chair is decorated with the pope’s coat of arms.

Water jets containing grains of sand were used to cut through inch-thick aluminum to form the delicate patterns on the altar and pulpit bases and part of the chair back.

The pope’s Mass chalice – made of gold plate over silver – was handmade for the liturgy by Juan Molina of Madrid, Spain, in partnership with Baker Liturgical Art of Hartford, Conn.

A team of liturgists with guidance from Washington Archbishop Donald W. Wuerl chose the readings: Easter readings with a special emphasis on the Holy Spirit, as well as the theme of the papal visit, “Christ Our Hope.”

Multicultural elements were to include a Scripture reading in Spanish, general intercessions in several languages spoken in the archdiocese, and lectors and gift bearers reflecting the diversity of cultures in the archdiocese.

To facilitate the distribution of Communion to the throngs of Mass attendees in just 20 minutes, the archdiocese had to plan for 300 extraordinary ministers of holy Communion and 300 volunteer ushers; seminarians were chosen as Mass servers.

In the weeks and days leading up to the Mass, multiple rehearsals – including one just for the distribution of Communion – took place.

The Mass program for the faithful was “designed to teach. … It will tell the faithful exactly what is taking place,” Father Knestout said.