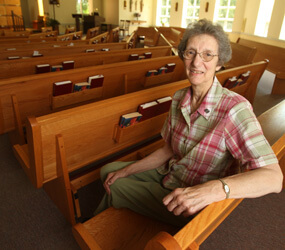 Sister Joan Minella likes to joke that as a teacher at St. Patrick School in Mount Savage in the early 1960s, she taught half the population of the tiny town.

When the School Sister of Notre Dame returned to Western Maryland to lead the parishes of St. Patrick and St. Ann in Grantsville in 1997, it was very much a homecoming as she took on the delicate task of being one of the Archdiocese of Baltimore’s first “pastoral life directors” – non-priests who oversee the day-to-day operations of a parish.

“I came back 34 years later and there they were – all my little first and second graders who were now parents and grandparents,” Sister Joan remembered with a laugh. “The people were great. They were very accepting.”

After six years at St. Patrick and St. Ann and another six years as pastoral life director of Prince of Peace in Edgewood, Sister Joan is stepping down to focus on her health. She has limited mobility brought on by two diseases that affect her nerves and muscles.

Prince of Peace hosted a farewell Mass and celebration June 28.

Looking back on her trailblazing ministry, Sister Joan said she has most enjoyed working with people.

“I liked being with them at moments of happiness and being able to listen in times of sadness,” said Sister Joan, the first woman pastoral life director in Harford County.

While most people embraced her leadership role in Western Maryland and Harford County, Sister Joan acknowledged that it took some a longer time to accept the concept of someone other than a priest leading their parish.

“But people began to see that it would work,” said the 74-year-old native of Rochester, New York. “They realized I wasn’t coming to change the church.”

As pastoral life director, Sister Joan was responsible for scheduling priests to cover Masses, visiting the sick and shut-ins, meeting with church groups like pastoral councils, keeping the parish finances and facilities in order, coordinating outreach and responding to emergencies.

At Prince of Peace, Sister Joan helped bring the 350-family parish out of debt as the community paid off its church and celebrated a mortgage burning.

The former principal of St. John the Evangelist School in Hydes and St. Mark School in Catonsville said her background in education was a big plus in administering parishes. Sister Joan is also a former teacher at Our Lady of Good Counsel School in Baltimore and Our Lady of Hope School in Dundalk. She holds a bachelor’s degree from the College of Notre Dame of Maryland, Baltimore, a master’s degree in theology from Mundelein College in Chicago and a master’s degree in pastoral counseling from Loyola College in Maryland, Baltimore.

Sister Joan, who professed her final religious vows in 1955, said she believes the continued use of pastoral life directors is very important. The archdiocese expanded the used of the model in the late 1990s as a way of addressing the clergy shortage.

“I think it’s working,” she said. “It’s a wonderful way for people to see men and women together in leadership in a parish – the ordained and the non-ordained.”

In her retirement, Sister Joan will live at her religious community’s wellness center in Baltimore. She is looking forward to having more time to read, sew and listen to classical music.

“Part of the healing for my diseases is to rest,” Sister Joan said. “Rest isn’t exactly in my vocabulary, but it has to be now. I’m sure I’ll be doing some ministry in some other place.”