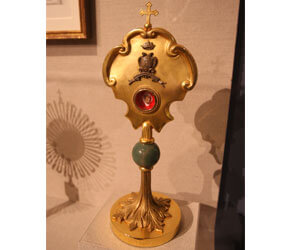 “We long to be perfectly carved and sculpted in the image of good men,” wrote Hugh of St. Victor, the famous 12th century scholar and teacher at the royal abbey in Paris, in a manual for young novices.

“When excellent and sublime qualities stand out in them, which arouse astonishment and admiration in men’s minds, then they shine forth in them like the beauty of statues, and we strive to recreate those qualities in ourselves.”

Hugh’s words about the bodies of holy men and women as sparks for a spiritual awakening offer a way to understand the 133 metalworks, sculptures, paintings and illuminated manuscripts in the exhibit “Treasures of Heaven” that opened at the Walters Art Museum in Baltimore Feb. 13.

What unites these diverse objects, besides precious materials and sublime craftsmanship, is a common function. They are all reliquaries – vessels made to contain the physical remains of holy people and objects associated with them.

For Catholics and Orthodox Christians, the veneration of relics is a living tradition.

“The Church does not forget,” Pope Benedict XVI says, “that, in the end, these are indeed just human bones, but they are bones that belonged to individuals touched by the living power of God. The relics of the saints are traces of that invisible but real presence which sheds light upon the shadows of the world and reveals the kingdom of heaven in our midst.”

Light in the shadows

The exhibit opens with the radiant reliquary bust of St. Baudime, nearly life size, made of copper gilt, horn and ivory over a walnut core, and once studded with gems. The rare effigy, made 900 years ago, has probably been in a church in the village of Saint-Nectaire since. It is traveling outside France for the first time.

Persuading the owners of such treasures to part with them for a year was the daunting task that fell to Walters curator Martina Bagnoli and her colleagues at the Cleveland Museum of Art, where the exhibit opened in October 2010, and the British Museum, where it will close next October in London.

Tradition honored St. Baudime as one of three missionaries sent from Rome by St. Peter to evangelize the Auvergne region of Gaul.

The Vatican was especially generous to this exhibit. It loaned the fourth century “Tree Sarcophagus with the Anastasis” sarcophagus, one of the first depictions of Christ’s triumph over death, and a silver reliquary of the head of the Roman martyr Sebastian that probably began as a bowl in antiquity, and was reshaped in the ninth century to hold the saint’s remains.

Rediscovered in pristine condition under an altar dedicated to the martyr at the Church of the Four Crowned Saints in the 17th century, the vessel points to an important role for relics. After the Council of Nicea in the eighth century, Christian altars were required to contain the relics of a saint. While no longer required, it is recommended if the relic is authentic and can be placed beneath the altar.

A reliquary box from the sixth century loaned from the papal Holy of Holies contains rocks and other fragments from sites in the Holy Land. Inside the cover are painted scenes identifying the origin of each stone, including the Nativity, Crucifixion, Pentecost, the Holy Sepulcher, and the Baptism of Christ.

Curator Bagnoli is proud of having convinced the Vatican to lend the Imago Pietatis from Santa Croce in Gerusalemme, a church in Rome built on soil brought from Golgotha in Jerusalem. The central icon is a micro-mosaic of the crucified Christ in death made of thousands of tiny multicolored stones, crafted in Byzantium around 1300.

This shows an icon, or sacred image especially valued in the Orthodox world, that is also a relic, because it was believed to have been the very image of Christ that appeared to Pope Gregory the Great during a miraculous Mass in the sixth century.

Be sure to take a long look at the dazzling book-shaped reliquary from the monastery museum in Zwiefalten, Germany. It contains a piece of the True Cross, the most important relic of Christ – naturally, there are no human remains – and the richly decorated frame features enamel medallions of the head, hands and feet of Christ, equating the body of Christ with the material remains of his cross and relics from holy places in his life.

Nora Hammerman is an adjunct professor of art and catechesis at Christendom College’s Notre Dame Graduate School in Alexandria, Va.