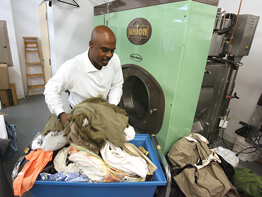 The way Shawn Goldfaden sees it, there’s something dirty about the way most drycleaners clean their clothes. It’s called perchloroethylene, a chemical solvent more commonly known as “perc” that has been used by dry cleaners since the 1950s. The EPA has classified perc as a toxic air contaminant and a possible human carcinogen, leading California to pass a statewide ban on the chemical in January.

Mr. Goldfaden, a 38-year-old parishioner of the Church of the Immaculate Conception in Towson, has taken a local stand against perc by opening Sparks Cleaners, an environmentally-friendly dry-cleaning business with locations in Sparks and Towson.

Billing his business as the “cleaner with a conscience,” Mr. Goldfaden proudly pointed out that he cleans clothes with liquid silicone – a product often used in shampoo that is made of water and sand. Using liquid silicone produces no hazardous waste that contaminates the environment, he said.
“It gets clothes cleaner and it doesn’t leave an odor on your clothes like perc,” said Mr. Goldfaden, whose store is licensed with the Kansas City-based GreenEarth Cleaning. “The clothes come out brighter and the colors don’t fade.”

A lawyer who had no experience in the dry-cleaning business before he established Sparks Cleaners in January, Mr. Goldfaden said his Catholic faith played a role in his venturing into green commerce. He views the earth as a creation of God not meant to be despoiled.

“I wanted to give an alternative to the community,” said Mr. Goldfaden, standing in his Towson shop lined with neatly pressed shirts hanging from biodegradable cardboard hangers.

“We’re the dry cleaner of Mother Nature,” he said with a smile. “We want to leave the environment better off than we found it.”

According to the Sierra Club, approximately 28,000 drycleaners use perc nationwide. The Sierra Club advises those who patronize perc-using cleaners to remove the wrapper from cleaned clothing outside and allowing the clothes to air out for four or five days to reduce exposure to perc. The environmental group strongly recommends going to cleaners that use alternative cleaning methods.

In addition to shunning perc in his dry cleaning, Mr. Goldfaden launders clothes with environmentally-friendly detergent that contains no phosphates, he said. A member of the Chesapeake Bay Foundation Mr. Goldfaden recycles wire hangers and is looking at ways of conserving more energy at his stores.

While it is more expensive to use green technology, Mr. Goldfaden has kept his prices on par with dry cleaners that use traditional cleaning methods. As more people learn about his business, he thinks he can attract a large clientele and he dreams of opening more stores in other locations. In less than a year, he already has 2,500 customers.

“I really do believe in it,” said Mr. Goldfaden, pointing to a large poster on the wall. “That sign says it all: ‘Good for Earth. Good for Earthlings.”