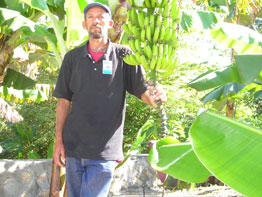 VILLA FRANCIA, Dominican Republic – In regions of the Dominican Republic where food is scarce and farm work only nets $3 a day when it’s available, Food For The Poor is developing tilapia and agricultural centers to provide nourishment, industry and self-sufficiency.

In one particular southwest Dominican Republic valley, FFP and its country partner – De Mi Casa A Tu Casa Inc. – have invested $350,000 in a three-acre tilapia and agricultural complex capable of feeding more than 100,000 citizens annually, said Angel A. Aloma, executive director of the Florida-based international relief and development organization.

Two years into the development of the Trinity Agricultural & Tilapia Center in Villa Francia, the colorful wood buildings still smell of fresh paint, the operational fish ponds are now capable of producing as much as 100,000 pounds of tilapia a year and it employs 25 people who are being trained for sophisticated jobs, Mr. Aloma said.

Coops are being prepared at the complex to raise as many as 20,000 chickens annually and it’s growing a variety of organic fruits and vegetables to combat the drastic malnutrition epidemic that plagues a majority of the inhabitants of the vicinity, said Liony Batista, the FFP project manager for the Central America region.

“The basic needs for nutrition are not being met in this area,” said Dr. Daisy Encarnacion of De Mi Casa A Tu Casa Inc., the charitable foundation based in San Juan de Maguana. “They are lacking protein, eggs, milk, which is especially critical for the children as their bodies are developing.”

Though there is an abundance of fertile land in the area, the farmers lack the economic resources to develop the crop or livestock production, and the poverty level of most residents makes the purchase of such goods out of the reach of the general population, Mr. Batista said.

The idea is to create a self-sustaining fish and agricultural facility that provides food at the market for a reduced price, free nutritional meals for the orphanages, and to create an industry the locals can eventually take over, Mr. Aloma said.

“The conditions are much better than what was here before,” said Confesor Fulcall, a 74-year-old lifelong resident of the region and a community leader. “The improvements bring us hope.”