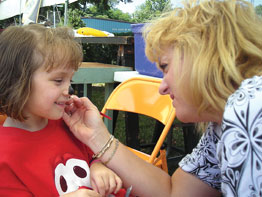 THURMONT – Just as Jane Sprague finished heaping creamy globs of homemade potato salad into a large bowl, it was time to fill another – and then another and another. Hundreds of hungry visitors had gathered in the parish hall in eager anticipation of the chicken dinner at Our Lady of Mount Carmel in Thurmont Sept. 1, and Ms. Sprague was one of 40 volunteers who worked feverishly to keep up with the round-the-clock demand. The doors opened at noon during the parish’s annual Labor Day Festival, and the ravenous crowds kept coming for five hours straight.

In addition to Ms. Sprague’s very own potato salad, workers dished out fried chicken, ham, coleslaw, green beans, corn-on-the-cob, tomatoes and peaches. Parishioners donated much of the food, including the choicest red tomatoes – plucked from home gardens, sliced into thick, juicy rings and garnished with homegrown, chopped onions and celery.

About 20 parish youths served the food on large platters to guests who were seated at round tables for the family-style meal. Those who weren’t eating stood in a line that stretched out the door, waiting patiently to get their crack at the food.

“Everything always seems to fall into place,” said Ms. Sprague, wearing a bright red apron and still holding a scoop of potato salad as she took a quick break from the culinary assembly line.

“This is a great day for our parish,” she said. “We couldn’t do it without the volunteers. Some of them have been doing it for years and years.”

Ms. Sprague and other volunteers prepared for the dinner for more than a week. They bought 160 pounds of potatoes for the salad and untold pounds of other ingredients. The poultry came from the Hillside Turkey Farms in Thurmont, which served up fried wings, legs, thighs and breasts from 240 chickens in total.

About halfway through the day, Barbara Anderson, pastoral life director of Our Lady of Mount Carmel and St. Anthony Shrine in Emmitsburg, estimated that more than 650 dinners would be served this year.

“It’s the major fundraiser for that particular parish,” said Ms. Anderson, noting that the event typically generates between $8,000 and $10,000 for the church. “People come from both of our parishes and from all around the area.”

This year, visitors hailed from far-flung corners of Edgemere, Brooklyn Park, Catonsville, Parkville and Sykesville, along with closer locals from Frederick and Hagerstown.

Asked what draws him year after year, Father Paul Witthauer said it’s “the nice spirit of the people.”

“Monsignor Lizor downed at least six pieces of corn,” Father Witthauer said with a laugh. “We also did it justice. It tasted like it just came off the cornstalk.”

Outside the hall, festival-goers enjoyed the peppy sounds of a local bluegrass band. Many filled a large tent to play bingo, while others tested their luck at the raffle wheels or browsed donated goods for sale. Children had their face painted and played games.

Asked what the most challenging part of the day was for the volunteers, Our Lady of Mount Carmel parishioner Linda Beach smiled and kept on filling platters with food.

“The Lord’s work is always easy,” she said.