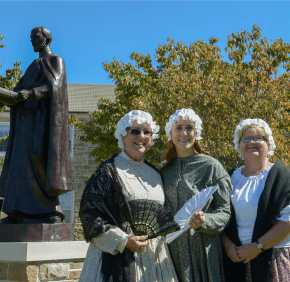 By Mary K. Tilghman
Special to the Review
FOREST HILL – Worshippers, some in 18th century garb, packed St. Ignatius Church Sept. 25 to open the 225th anniversary year of the Hickory parish.
While that liturgy was held in the church that was dedicated in 2001, its tiny white church – dedicated in 1792 – is the oldest in continuous use in the Archdiocese of Baltimore.
The celebration continued with the dedication of a statue of the parish’s patron saint and a reception. The original church, one of eight archdiocesan “Holy Door” sites during this Year of Mercy, and the parish museum were open to visitors all afternoon.
Auxiliary Bishop Denis J. Madden presided. Monsignor James M. Barker, the pastor, concelebrated along with associate pastors Father Stephen R. Sutton, Father Isaac Makovo and Father Kennard Muller; and three visiting priests, Monsignor Robert Armstrong, Monsignor Paul Cook and Father Jason Worley.
“What a great day this is!” Bishop Madden said as he opened the celebration. During his homily, he outlined the history of St. Ignatius, north of Bel Air in Harford County, which was begun by Jesuits who had ministered in the area since the early 1700s. The original church was completed Sept. 27, 1792, and dedicated by the first American bishop John Carroll.
“I believe God has a plan for this church,” Bishop Madden said. “You are the living stones of St. Ignatius Church.”
He noted that from the parish six others were created: St. Patrick in Cecil County, St. John the Evangelist in Hydes, St. Patrick in Havre de Grace, St. Mary of the Assumption in Pylesville, St. Francis de Sales in Abingdon and St. Margaret in Bel Air.
The St. Ignatius sanctuary was decorated with flowers in a blaze of fall colors. The choir, accompanied by organ, flute, violin and trumpet, filled the church with song before and during Mass.

Sister Janette Agnes, left, and Sister Lawrence Mary, of the Little Sisters of the Poor, look on as the procession begins for the 225-anniversary Mass at St. Ignatius, Hickory, September 25. The Harford County church is the oldest Roman Catholic Church in continuous use in the Archdiocese of Baltimore. (Kevin J. Parks | CR Staff)

The opening procession began with Fourth Degree Knights of Columbus, swords by their sides, and included seminarians who serve at the parish or who have served it in the past.
Some parishioners wore clothing reminiscent of colonial days, as Cetta York, director of faith formation, did the second reading wearing a mobcap and long green dress.
Timothy Malloy’s red coat and breeches are clothes he wears as a member of the Sons of the American Revolution. A parishioner since 1990, he was a member of the building committee for the new church.
Parish corporator Joan Strickland wore a colonial-style skirt and blouse in the offertory procession. Her clothes were sewn by her daughter Maryanne Roach, and Strickland was more excited about another item her daughter stitched.
Roach embroidered the corporal, a square cloth laid over the altar cloth, with a white decorative cross, the parish’s name and the dates, 1792-2017. The corporal was cut from an antique altar cloth used in the original church.
“That ties the two churches together,” Strickroth said.
It was one of several items used at Mass with ties to the original church, according to Monsignor Barker. They included torches from the early 20th century and an 1850s-era gong that was sounded during the consecration.
As Mass concluded, Monsignor Barker recalled St. Ignatius’s beginnings as a small rural parish. Now it has more than 3,500 families, a large faith formation program and some 30 organizations.
“Without you, this campus would be a bunch of nice buildings,” he said. “With you, we are the church of today.”
After Mass, Bishop Madden sprinkled the statue of St. Ignatius Loyola with holy water and blessed it. The Anderson family donated the statue, set up between the two churches. Pete Anderson, an anniversary committee member, said the gift honors his parents, John and Virginia Anderson.


It took a lot of parishioners to make the opening celebration a success. Among them, Deacon James Longenecker and his wife, Nadine, the parish hospitality chairpersons, arranged for the food and entertainment at the reception. The deacon said the food was prepared by parishioners and a local caterer, Baldwin Meals. Connor Chaikowsky performed with a quartet of young musicians. Forest Hill florist John Schneider arranged the flowers in the church and hall.
Andrej Bevec and his family have belonged to the parish for 16 years. “We really love the church. We really like the historic church,” he said.
Mary Lou Jones, a parishioner since 1979, wore a sweater embroidered with the anniversary logo, thanks to her daughter Mary Louise Mulligan.
“I came here when it was a little church. Everybody knew everybody else,” Jones said. “I saw it just build up.”
Celebrations will continue throughout the anniversary year, culminating with Mass Sept. 24, 2017, to be offered by Archbishop William E. Lori.

To see more photos from the event, visit our online album here.