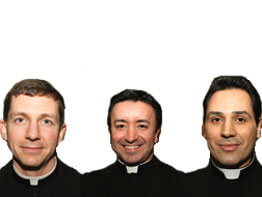 A lawyer, a professional chef and a computer specialist will take one step closer to the priesthood when Archbishop Edwin F. O’Brien ordains them transitional deacons at 10 a.m. on May 10 at the Basilica of the National Shrine of the Assumption of the Blessed Virgin Mary in Baltimore.

Two of the three seminarians, Gonzalo Cadavid-Rivera, 35, and Hector H. Mateus-Ariza, 36, are Spanish-speaking natives of Colombia, while Marc L. Lanoue, 42, hails from Massachusetts.

As transitional deacons, Mr. Cadavid, Mr. Mateus-Ariza and Mr. Lanoue will be able to proclaim the Gospel during Mass, perform baptisms, witness marriages, perform vigil services and bring Communion to the sick.

Mr. Cadavid, who earned his law degree from the Universidad Cooperative de Colombia in 2000 and a doctorate in public and administrative law from Universidad de Medellin, said he wants to serve as a priest in the Archdiocese of Baltimore because he hopes to assist the growing Spanish-speaking population in Maryland as well as all people. A friend invited him to consider ministry in the United States, he said.

“I thought it would be an opportunity for me to serve the universal church by coming to America,” said Mr. Cadavid, a seminarian at Mount St. Mary’s Seminary in Emmitsburg who currently serves at St. Michael the Archangel in Overlea.

Working mostly in the English-speaking community while in Baltimore, Mr. Cadavid said his pastoral experiences have strengthened his English and understanding of American culture. He wants to serve wherever the archbishop assigns him, he said.

“I want to give my best,” he said. “I’m excited, and I give thanks to the Lord everyday for what he’s given me.”

Mr. Mateus-Ariza, also a seminarian at Mount St. Mary’s in Emmitsburg, said he followed a similar path to Baltimore from South America. He applied to the Archdiocese of Baltimore after a friend told him about the need for Spanish-speaking priests in the United States.

Mr. Mateus-Ariza formerly worked as a professional chef for 10 years and eventually for the president of Colombia and his cabinet. He discovered his priestly vocation while ministering in Honduras in 2001.

“The Archdiocese of Baltimore is a place I’m so proud to call home,” said Mr. Mateus-Ariza, whose pastoral assignments have included St. Joseph in Hagerstown, St. Michael the Archangel in Overlea and St. Joseph in Fullerton.

“From the very beginning of my time here, I found kindness and support,” said Mr. Mateus-Ariza, who has studied English for the last several years. “I feel loved and cared for by the people.”

Mr. Mateus-Ariza said he sees a connection between his background as a chef and his future priestly ministry. He hopes to feed both soul and body as he brings people together around the altar and around the family dining table, he said.

Mr. Lanoue came to the Archdiocese of Baltimore after working in a variety of computer, teaching and parish positions. With a bachelor’s degree from Williams College in Williamstown, Mass., Mr. Lanoue majored in religion and minored in computer science. He held several positions as a computer specialist and also worked as an organist and choir director for several years.

He holds a master’s degree in theology from the University of Notre Dame in South Bend, Ind. In 2000, he moved to Washington, D.C., to begin work on a doctoral degree in biblical studies at The Catholic University of America. While earning his doctorate, Mr. Lanoue worked as a master of ceremonies at the Basilica of the National Shrine of the Immaculate Conception in Washington. He also taught undergraduates at Catholic University and offered Scripture courses at several parishes in the Washington archdiocese. He entered St. Mary’s Seminary and University in Roland Park in 2005 after working for the Archdiocese for the U.S. Military Services in Washington.

Mr. Lanoue said he is looking forward to his ministry as a transitional deacon. His former pastoral assignments have included Joseph Ritchie Hospice in Baltimore, Holy Trinity in Glen Burnie and St. John in Westminster, and he is currently serving at St. Ignatius in Hickory.

His pastoral experience has “helped to solidify components of the priestly ministry,” said Mr. Lanoue, noting that he views the priesthood as a way of serving others.