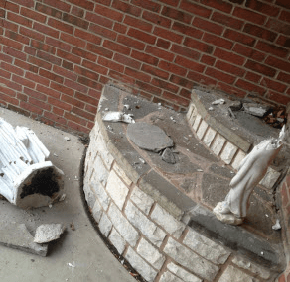 By Elizabeth Lowe
elowe@CatholicReview.org
Twitter: @ReviewLowe
HALETHORPE – Mark Mangus thought he saw trash in the middle of the parking lot of the former parish school of Church of the Ascension July 31.
It turned out that so-called trash was a piece of concrete from a broken statue of the Blessed Virgin Mary.
Three statues of Mary and a plaque of the Madonna and child were smashed between approximately 8 p.m. July 30 and 6:30 a.m. July 31, when Mangus found the vandalized items, said Father John A. Williamson, pastor of Church of the Ascension.
The parish school, which closed in 2010, is now home to Compass Academy, a school for children in grades one through 12. It is adjacent to Church of the Ascension. The parish celebrated 100 years of worship this spring.
“Nowadays you can (almost) understand crime as far as breaking in,” Mangus said, “but this is just downright hate.”
There have been other acts of vandalism on parish property over the past four years, including a break in at the former parish school and lawn equipment stolen from the garage, Mangus said.
“This (the statue vandalisms) is the worst that’s happened because everything else has been monetary gain,” Mangus said. “This is all directed to religion.”
Father Williamson echoed Mangus’ sentiments.
“My gut is saying someone has an ax to grind against the Catholic Church,” Father Williamson said. “Three images (of Mary) seems a little coincidental. It’s sad that something like this would happen. It’s disturbing.”
There have been similar acts of vandalism at Church of the Immaculate Conception in Towson and St. Michael the Archangel in Overlea in the past couple of years, said Sean Caine, a spokesman for the Archdiocese of Baltimore.
The parish is looking into replacing the statues, Father Williamson said. There is no video surveillance of the event and a police report has been filed.
The estimated cost of the statues and plaque is unknown.
“It seems like a malicious act of violence against the Catholic faith,” Father Williamson said.
PrevNext