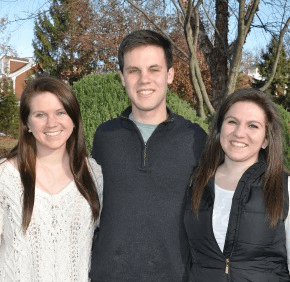 (This story is courtesy Fairfield University in Connecticut)

For John Marbach and Sherry Pressler of Belle Mead, N.J., it will be a wild ride as their triplets graduate from three different universities, in three different states, on three consecutive days starting this Saturday, May 16. Planning for this weekend got underway in 2010.

“Four nights out, three different hotels, train tickets, car travel, and airplane travel, wow,” Pressler said.
Her triplets – Melanie, Megan and John Jr. Marbach – will graduate respectively from Loyola University Maryland in Baltimore, Md., on May 16; Fairfield University in Fairfield, Connecticut May 17; and Wake Forest University in Winston-Salem, North Carolina on May 18.
“The whole family feels incredibly lucky that the ceremonies fall on different days,” said Megan Marbach, a senior at Fairfield University’s School of Nursing. “Melanie and John are my best friends for life, so I wouldn’t miss their graduations for anything.”
“When they were choosing where to attend college four years ago, I remember checking the graduation calendars,”  Pressler said. “I would be heartbroken not to be able to attend all three graduation ceremonies.”
Added John of his brood, “All three children felt it was important to attend each other’s graduation.”

The Marbach triplets at age 3. (Courtesy Fairfield University)
The parents’ graduation weekend will start on Thursday afternoon when they depart New Jersey. First stop is Baltimore, for Melanie’s graduation from Loyola where she majored in accounting. She’s the youngest of the three, by six minutes. Meanwhile, Megan will be traveling by train from Fairfield to New Jersey and then drive to Maryland while John Jr. will fly in from North Carolina.
Friday evening, the family will have dinner in Baltimore to celebrate Melanie’s graduation, a gathering that will double as a 22nd birthday party for the triplets.
After the Loyola graduation Saturday morning, the next stop is Connecticut. The Marbachs will begin a road trip up Interstate 95 northbound to Fairfield, which is located about an hour from Manhattan and like Loyola, is a Jesuit institution.
Fairfield’s commencement is 9:30 a.m. Sunday morning. Then it’s off to Fairfield Beach for a celebration luncheon hosted by Megan and her roommates at their house. Afterward, the five Marbachs will drive to JFK International Airport for a flight to Winston-Salem and make their way to Wake Forest where John Jr. majored in computer science. The university’s graduation is on Monday morning at 9 a.m.
“Our flight back home on Tuesday morning will be filled with a combination of extreme pride for the three graduates and the exhausted parents,” said Sherry Pressler, who works for Johnson & Johnson.
“It’s worth it – all the travelling,” said Megan. “It’s about encouraging each other on.”
John, director of Sales for the Tranzonic Companies, said the years have truly flown by since the triplets were born. “We have some elementary school pictures on a kitchen wall. The pictures seem like [they were taken] yesterday.”
As far as post graduation plans, Megan and Melanie, both graduates of Montgomery High School in N.J., plan to live and work in New York City. Megan would like to practice as a nurse in orthopedics, a dream she has harbored since tearing her ACL and getting such good nursing care in recovery. A graduate of the Hun School of Princeton, John, an entrepreneur, is headed to Silicon Valley to work for a start-up, Tsumobi.

Also see:
Beyond the Bell: Cristo Rey performers step out of comfort zones