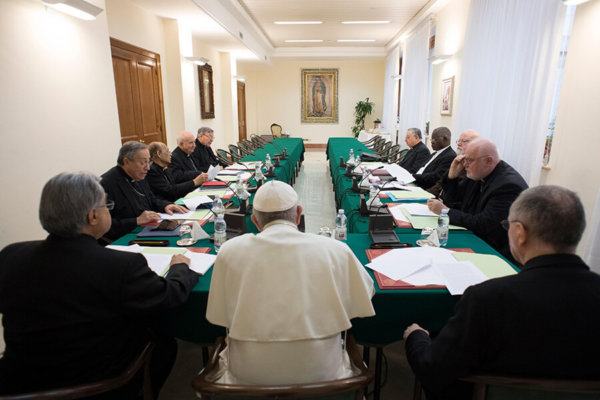 VATICAN CITY (CNS) — Three members of Pope Francis’ Council of Cardinals have officially ended their service as papal advisers on the reform of the Roman Curia.

In September, the council members had asked the pope for a reflection on “the work, structure and composition of the council itself, also taking into account the advanced age of some of its members.”

In response to that request, the pope wrote to three cardinal-members at the end of October thanking them for their service, Greg Burke, director of the Vatican press office, told reporters Dec. 12.

The three cardinals have missed a number of the meetings, which are scheduled five times a year in Rome. Cardinal Pell has been on trial in Australia on multiple sex abuse charges and Cardinal Errazuriz was to face questioning by a local prosecutor over his handling of abuse allegations. The Chilean cardinal told Radio Cooperativa in November his departure was not a resignation but was because his term had ended.

Asked whether Cardinal Pell’s remaining position might change as prefect on a temporary leave of absence from the Vatican’s Secretariat for the Economy, Burke would not comment, but said, “The Holy See has the utmost respect for Australian judicial authorities. We are aware that there is a suppression order in place by the court and we respect that order.”

No new members of the Council of Cardinals were set to be appointed at this time, Burke told reporters.

Burke confirmed that the meetings Dec. 10-12 had been attended by five of the now six remaining members: Cardinals Sean O’Malley, 74; Oscar Rodriguez Maradiaga, 75, of Tegucigalpa, Honduras; Oswald Gracias, 73, of Mumbai, India; Reinhard Marx, 65, of Munich and Freising, Germany; and Giuseppe Bertello, 76, president of the commission governing Vatican City State. Cardinal Pietro Parolin, 63, Vatican secretary of state, was unable to attend because he was leading a Vatican delegation at a U.N. meeting in Morocco.

Burke said the members discussed several topics including the Feb. 21-24 summit for bishops’ conferences on the prevention of the abuse of minors and vulnerable adults, the reform of the Vatican’s communications operations, reducing the Holy See’s operating costs without layoffs and the need for long-term budgetary planning.