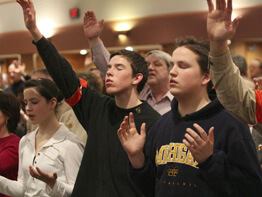 DETROIT – One of the world’s foremost Catholic preachers told a Feb. 16-18 gathering of more than 3,000 people involved in the charismatic renewal movement that they should be focusing more on the future than on the movement’s past.

The preacher of the papal household spoke Feb. 17 in the Riverfront Ballroom of Detroit’s Cobo Center.

Harkening back to Pope Paul VI, the first pope to welcome the charismatic renewal movement in the church, Father Cantalamessa said the best speech he ever heard the late pontiff give was one in which he said, “The first need of the church is for a perennial Pentecost – an ongoing Pentecost – in which the church would have fire in her heart, works in her midst and prophecy in her outlook.”

Father Cantalamessa, 73, had his own charismatic experience of being baptized in the Holy Spirit 30 years ago, and was appointed to his post with the Holy See in 1980 by Pope John Paul II, then reconfirmed in his position by Pope Benedict XVI.

He told the gathering the best way to prepare for a new Pentecost was to study the opening chapters of the Acts of the Apostles, in which the original Pentecost is described.

Traditional Western and Eastern depictions of that event at which the Holy Spirit descended on a rather sedate gathering of the apostles do not seem to match the event as he understands it, Father Cantalamessa said.

Far preferable, he said, is a recent African depiction, which has some apostles hugging each other, while they all seem to be experiencing some kind of religious ecstasy.

“They were amazed; whenever God appears, there is amazement, surely. The apostles’ lives had completely changed, radically changed. They had been given an experience of the presence of God, the majesty of God and the holiness of God,” he said.

In a homily the next day, Father Cantalamessa spoke of resurrection and hope.

People, he said, “can be dead in the heart, but be physically alive” when they are discouraged, sick, feel abandoned, have no hope, “and especially if somebody lives in sin – sin is death.”

Resurrection of the heart is not just something for Christians to experience on their own, he continued. “We must also raise other people” and can do that by calling those who feel abandoned and if we know couples where love has left their marriage and they and their children suffer, encourage them to “start again in the name of God – and then you have raised the dead.”

In addition to Father Cantalamessa, the gathering heard from other leading figures in the Catholic charismatic renewal, including Bishop Sam G. Jacobs of Houma-Thibodaux, La.; James “Butch” Murphy; Redemptorist Father Tom Forrest; and Angie Neck, who chairs the National Service Committee of the Catholic Charismatic Renewal.

Sister Nancy Kellar, a Sister of Charity who was a member of the first charismatic house of prayer in the United States, told the assembly participants they must be evangelists. “The gift of the Holy Spirit was given to us, not to tie a high on with God – as much as we love to do that – but for holiness and for mission and ministry.”

As to opportunities for evangelization, she said most will come about through listening to others tell their stories. “Evangelization starts first by listening, not by speaking,” she said.

But Sister Nancy cautioned that charismatics will likely be more effective in their evangelization if they avoid some of the terms that have become common in the charismatic movement.

“We need to use normal language,” she said, advising them to avoid starting out with terms such as “born again” or “slain in the Spirit.”

Contributing to this story was Marylynn G. Hewitt.