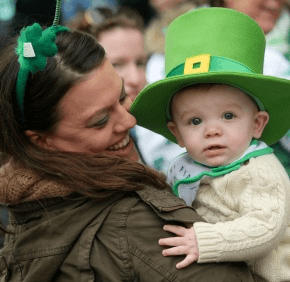 By Maureen Cromer
mcromer@CatholicReview.org
As a runner headed off to the Under Armour KELLY St. Patrick’s Day Shamrock 5K, he relayed to friends that he hoped the rain would hold off.
The weather, however, had different plans for the attendees of the events surrounding the annual St. Patrick Parade in Baltimore March 13, which nonetheless drew thousands for one of the city’s most popular celebrations.
The day began with 10:45 a.m. Mass at the Basilica of the National Shrine of the Assumption  of the Blessed Virgin Mary, celebrated by Archbishop William E. Lori.

Mummers perform during the March 13 St. Patrick Parade in downtown Baltimore. (Karen Osborne/Special to the Review)

“Jesus Christ, eternal son of God the Father, was sent into the world to reveal the face of the father of mercies, to save us from our sins, to heal the wounds of sin and division, and to unite us in goodness, truth, and love,” Archbishop Lori said.
The archbishop added that when believers welcome God’s mercy, especially in the sacrament of reconciliation, they “allow God’s mighty power to enter our hearts not only to cleanse us of our sins but to strengthen us to sin no more.”
After Mass, attendees walked up and down Charles Street in anticipation of the 5K and parade.

Runners heading up the pack in the Shamrock 5K take off from the starting gate before the March 13 St. Patrick Parade in downtown Baltimore. (Karen Osborne/Special to the Review)

As the Shamrock 5K began, so did the rain. What started off as a light sprinkle quickly turned into a cold shower, which did not deter parade participants and observers.
Calvert Hall College High School in Towson, The Catholic High School of Baltimore, and Baltimore’s Institute of Notre Dame, Mercy High School and Holy Angels Catholic School were among the schools from the Archdiocese of Baltimore marching in the parade.
It also drew Irish dancers, drum and pipe brigades. John ‘Jay’ Linahan served as the grand marshal of the parade.

Mercy High School cheerleaders react to the rain during the March 13 St. Patrick Parade in downtown Baltimore. (Karen Osborne/Special to the Review)

To view more photos or to order prints, visit our Smugmug page here.

Saints for a day