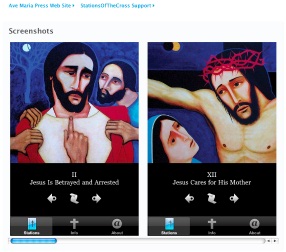 WASHINGTON – In a world that boasts continual technological change, the iPhone by Apple has gained near-iconic status. Even Apple boasts there are more than 140,000 applications – or “apps,” in Apple-speak – that users can obtain for their phones.

It only follows that there would be some clever Catholics who have devised apps to bolster people’s faith.

Dave Brown of Bend, Ore., invented a virtual rosary-beads app as a sign of thanksgiving after doctors found a successful bone-marrow match for his kindergarten-age daughter in 2008, curing her of her leukemia.

Brown and his wife, Jackie, prayed the rosary frequently through their daughter’s treatment, even though one parent was in Bend keeping the home fires burning while the other stayed with the desperately ill girl in Portland, Ore. How? With iPhones that Dave Brown bought so they could talk and send photos and video.

As an information technology manager at a window and door company, Dave Brown used his know-how to design an iPhone app that allows the user to pray the rosary. The small screen has animated beads that can be moved with a touch. Corresponding prayers pop up on the screen, along with devotional images. The application knows which mystery to pray on which day. It even knows where the user left off if the rosary is interrupted. The app also has Spanish and French capability.

Brown told the Catholic Sentinel, Portland’s archdiocesan newspaper, that within a year of its introduction, more than 20,000 sales of the app had been recorded. The Browns decided to keep the price low – 99 cents – to get as many people as possible praying.

A similar rosary app, known as the Prayer Beads App, was designed by Premier Christian media in England in advance of Pope Benedict XVI’s visit to Great Britain later this year and made available in March through Apple’s online store.

Richard Smart, the firm’s marketing director, told the Telegraph, a daily newspaper in England, he got papal encouragement to develop the app. “He has been encouraging young Catholics to use social media to share the message of Christ,” Smart said. “We want to support that. In a way, you could say that we made this app for the pope.”

The rosary beads for this app appear to sit on a lush bed of velvet. “The Prayer Beads App is intended for anyone who meditates or prays. Using the app is a tactile experience,” Smart told the Telegraph.

In California, the Riverside Press-Enterprise daily newspaper reported that a San Bernardino priest will use an iPhone app to deliver daily inspirational video messages.

According to the Press-Enterprise, Father Manning will record his daily messages at the San Bernardino studios of Wordnet Productions, a Catholic television ministry the priest founded

The foundation chose Father Manning for his ability to effectively convey the church’s message, according to Robert Thorne, CEO of a Beverly Hills firm that co-manages global licensing and media for the foundation.

And, just in time for Lent, Ave Maria Press has developed its own app: a Stations of the Cross app. While already available free at Apple’s online iTunes app store, it was to be unveiled during the Los Angeles Religious Education Conference, to be held March 19-21.

An announcement by Ave Maria said the app works on both the iPhone and the iPod Touch, another Apple product.

The app features artwork by Michael O’Brien. It is based on a biblical-based Way of the Cross conceived by Pope John Paul II in 1991.

“We are delighted to explore creative digital ways of keeping our readers connected to God through prayer. It’s our hope that many will take advantage of this free prayer resource,” said Ave Maria Press publisher Tom Grady. The Ave