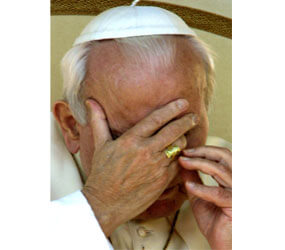 VATICAN CITY – The Sept. 11, 2001, terrorist attacks in the United States horrified the pope and Vatican officials, who unequivocally condemned terrorism and offered prayers for the dead, the survivors and the rescue workers.

The attacks shook the world but did not destroy the commitment to dialogue and cooperation of Catholic and Muslim leaders in interreligious relations.

While too many people, and too many media outlets, grabbed on to cliches about Islam, Catholic and Muslim dialogue partners poured new energy into their efforts to educate their faithful about the true beliefs of each other’s religion and about the fact that it is blasphemy to invoke God’s name in the commission of violence.

After the attacks, Pope John Paul II immediately sent a telegram to President George W. Bush, and the pope spoke about the tragedy at his general audience the next day, saying: “Yesterday was a dark day in the history of humanity, a terrible affront to human dignity.”

“Even if the forces of darkness appear to prevail,” he said at the audience, “those who believe in God know that evil and death do not have the final say. Christian hope is based on this truth; at this time our prayerful trust draws strength from it.”

Archbishop Michael Fitzgerald, the nuncio to Egypt who was secretary of the Pontifical Council for Interreligious Dialogue in 2001, said, “the only reference to religion in these messages was a statement of belief in the love of God, which is greater than all evil.”

Two months after the attacks, then-Cardinal Joseph Ratzinger was interviewed by Vatican Radio and asked what his first reflections about 9/11 would have been. He said he might have pointed out that “religion here is being abused for other ends; it has been politicized and made a factor of power.”

“On the other hand, perhaps I would have spoken more about the need to know God’s human face. If we see Christ’s face, our Lord who suffers for us and showed how much he loved us in dying for us, we have a vision of God that excludes all forms of violence,” the cardinal answered.

As pope, he visited ground zero in New York in 2008 and recited a special prayer he wrote to mark the occasion.

He prayed, “God of peace, bring your peace to our violent world: peace in the hearts of all men and women and peace among the nations of the earth. Turn to your way of love those whose hearts and minds are consumed with hatred.”

Archbishop Fitzgerald said that, in response to the terrorist attacks, the reactions of the church and of Catholic-Muslim dialogue groups, including in the United States, came out of a context of mutual knowledge and respect.

“Common declarations could not have been made if good relations had not already been established,” the archbishop said.

“For Islam, peace is one of the 99 names of God, and human beings are called to be the representatives on earth of this God of peace,” Archbishop Fitzgerald wrote Aug. 30 in an email response to questions from Catholic News Service.

For Catholics, he said, God is the God of peace, and he has revealed that peace most fully in Jesus.

“The same message has been repeated time and time again, whenever attacks are carried out in the name of religion. It needs to be repeated, since human beings are easily swayed by emotions, and they need to be warned against the manipulation of religion,” the archbishop said.

Adnane Mokrani, a Tunisian Islamic scholar who teaches at the Pontifical Gregorian University and the Pontifical Institute for Arabic and Islamic Studies in Rome, said, “it scandalized me to hear my religion associated with terrorism” after the attacks. Osama bin Laden and his followers had turned a narrow interpretation of Islam into an “armed and violent” call for young Muslims to join a campaign against the West, he said.

“Ten years later, the complete opposite has occurred,” Mokrani said. Across the Arab world, “the young are uniting to struggle – in a peaceful and civil way – against dictatorships, asking for democracy, dignity, human rights and social justice – universal values shared with the West.”

“This signals the real death of bin Laden’s plan; a new phase of history has begun,” Mokrani wrote in an article he prepared for an Italian magazine and also gave to CNS.

Unfortunately, he said, assumptions in the West about Islam and violence linger. When a young man went on a rampage in Norway in July, killing 76 people, many media outlets initially surmised that Muslim terrorists were involved.

Archbishop Fitzgerald said Catholic-Muslim dialogue efforts, and particularly the Vatican’s dialogue with Egypt’s al-Azhar University, an influential center of study for Sunni Muslims, increasingly have focused on fighting the generalizations about religion that lead to prejudice.

“There is a great need for mutual respect, an objective presentation of religions in school textbooks and more accurate reporting in journalism,” the archbishop said.

“Just as it needs to be repeated again and again that all Muslims are not terrorists, so it needs to be clarified that the politics of Western countries do not represent Christianity,” he said. “Some progress has been made in this respect, but in interreligious relations one has always to be ready to begin all over again.”