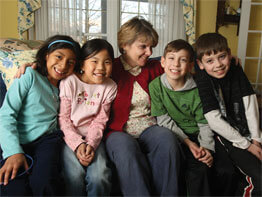 Molly Hennessey wrapped her arms around her mother, Karen, as the two sat at the dinner table of the family’s Ellicott City home, the wind of a February night howling outside.

The 10-year-old rested her head on Mrs. Hennessey’s shoulders. Brothers Sean, 11, and Patrick, 9, played in another room as little sister Kira, 7, darted in and out of the kitchen, chatting up anyone who would listen.

Mrs. Hennessey pulled Molly close, cherishing the moments that she lives for each day. Her children – and their future – inspire the nurse practitioner to rise early every morning and commute to Georgetown Hospital in Washington, so that she can afford to send them to Trinity School in Ellicott City.

“People,” she related, “say ‘How do you do it?’ and I respond, ‘When those feet hit the floor at 6:30 in the morning, you don’t have a choice.’ You just do it because you’ve made that commitment.”

The Hennessey home overflows with activity, energy and love. Noticeable by his absence is the children’s father. Jim Hennessey died at age of 52 of a heart attack three years ago. His spirit remains, as the children talk about their father as if they spoke yesterday.

“He always said they were the most important thing he laid his eyes on,” Mrs. Hennessey said. “They have done amazingly well because they have a loss that can never, ever be replaced. We are a really close family, but it’s … different.”

On a Saturday morning in January 2006, Mr. Hennessey awoke and talked with Molly, who had been adopted eight months earlier, after spending her first six years in China. A long embrace prompted him to walk up to his wife and say, “Molly and I just had the best hug.”

Mr. Hennessey headed to a neighborhood volleyball game. Within hours, the phone rang.

“Jim’s down,” said a family friend, his voice trembling.

When Mrs. Hennessey arrived at the volleyball game, her medical background told her all she needed to know. Her husband of 11 years, the love of her life, was gone.

Mr. Hennessey’s funeral Mass was celebrated at St. Louis, Clarksville. The family attends Mass at both St. Louis and Church of the Resurrection in Ellicott City.

Sean and Patrick are Mrs. Hennessey’s biological children. Molly and Kira were adopted, from China and Guatemala, respectively, but the girls share a physical bond with their parents.

Both Jim and Karen had surgery-filled childhoods, his to repair a cleft palate, hers for scoliosis, curvature of the spine. Mr. Hennessey always wanted to support a child dealing with similar hardship, and Kira had a severe cleft palate and lip when they adopted her as an infant. Like Mrs. Hennessey, Molly has scoliosis.

“I think the reason Daddy was here,” Molly said, “was to help Kira and I.”

“I’m not mad at Daddy,” Sean once told his mother, “I just wish he could have stayed.”

At Mr. Hennessey’s death, Sean was in the second grade at Trinity School, while Molly was in first and still adjusting to her American surroundings, and Patrick was in kindergarten. Later that year, Kira became the family’s fourth Catholic school student.

“They were just a wonderful family who were very committed to their faith and education right from the start,” Sister Catherine said. “They really brought something very special to the community.”

Trinity families rallied in support of the Hennesseys after Jim’s death. Sister Catherine said families helped purchase lunches for the children as they mourned the loss of their father and helped take them to sports practices.

Sister Catherine recalls Mrs. Hennessey, days after her husband’s funeral, standing in front of Sean’s class, assuring his friends that his father was in a better place.

“She was so focused on her children,” Sister Catherine said. “We often wondered how they were going to manage, but we just knew we would do everything possible to make sure that family stayed at Trinity.”

Mrs. Hennessey said she never wavered from keeping her children at Trinity. Both she and her husband were products of Catholic schools and wanted a similar religious formation for their children.

Mrs. Hennessey has been reassured by Trinity School’s reaction to her husband’s death and the attention paid to the needs of their daughters.

Despite the cleft palate, Kira is the most talkative, her affection for Trinity evident.

Asked what she liked about school, Kira raised her hand as if in class and offered: “I like my friends, I like my teacher and I like my school! I also like the water fountain!”

In unison, her family laughed.

Mrs. Hennessey wishes her husband was still beside her for first Communion celebrations and birthdays. When her children smile, she can’t help but think of him.

“He gave me the greatest gift that I ever could ask for,” Mrs. Hennessey said. “I’ve thought sometimes about whether I wanted 11 great years or 30 mediocre ones. You have to ask yourself those questions. He gave me 11 great years, and I wouldn’t have it any other way.”