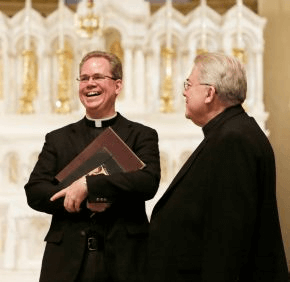 ezygmont@CatholicReview.org
Twitter @ReviewErik
EMMITSBURG – Monsignor Andrew R. Baker has been rector of Mount St. Mary’s Seminary for less than a month, but he is crystal clear on what he wants from each and every seminarian.
“Be a holy priest,” he said, clarifying the term “holy” with the Scriptural definition: “Be perfect as your heavenly Father is perfect.”
“For (the future priests) to be holy is for them to be a father to their people, like the heavenly Father,” explained Monsignor Baker. “They need the virtues, the skills, the love, sacrifice, patience, kindness … the correction at times, the ability to correct, to be a good father.”
A priest of the Diocese of Allentown, Pa., Monsignor Baker grew up in Coopersburg, in the Lehigh Valley, the seventh of 12 children in a traditional large Catholic family.
“You’re kind of forced out of anonymity by the fact that you’re sort of compelled to do something unique,” he said of growing up with so many siblings, including six older brothers, “some of whom were very good athletes.”
At Central Catholic High School in Allentown, Monsignor Baker lettered four years in cross country and was on the volleyball team for three years. The 49-year-old enjoys swimming for recreation and exercise.
Entering the seminary immediately out of high school, he was ordained a priest in 1991. After a three-year parish assignment, he continued his studies abroad, earning his doctorate in 1997 from the Pontifical University of the Holy Cross in Rome with a dissertation titled “On Contraception: Two Diverse Approaches.”
Returning to Pennsylvania, the monsignor served as a university chaplain and high school teacher before joining the faculty of St. Charles Seminary in Philadelphia, teaching moral theology and serving as a formation advisor.
From 2001 to 2009, Monsignor Baker served in Rome as an official at the Congregation for Bishops, assisting St. John Paul II and Pope Benedict XVI in the appointment of bishops worldwide, before returning to Allentown and Cathedral Church of St. Catherine of Siena, where he served as rector from 2009 until he assumed his role at the Mount.
The monsignor plans to form future priests according to Pope Francis’ call for them to acquire the “smell of the sheep” they will serve.
“The best way to teach it is to model it in my own approach to them,” he said, adding that he will get to know each and every one of the 127 seminarians at the Mount, “one at a time.”
Monsignor Baker has made some general observations of today’s seminarians.
“One thing that I do see is this – willingness to be counter-cultural, as well as evangelizing that culture,” he said.
“They kind of realize that this kind of lifestyle that they’re being called to, more and more, it isn’t being appreciated as much by the general culture,” he said, citing obedience, celibacy, service and having to frequently relocate. “And they’re OK with that.”
Furthermore, today’s seminarians are eager to engage rather than put themselves “behind a wall.” He cited Mount2000, a retreat program for high school students created by the Mount seminarians, as “an incredible outreach.”
An avid writer, Monsignor Baker has been published, according to his biography, in several national journals, such as Catholic Dossier and Lay Witness. He also wrote for The A.D. Times, a publication of the Diocese of Allentown.
In “Ordination and Same Sex Attraction,” an article published in the Jesuit-produced journal America in 2002, he argued against admitting men to holy orders with “exclusive or predominant” same-sex attraction.
In his blog, Door of Faith, he has tackled “Laudato Si,’ ” the pope’s encyclical on caring for creation. He has posted photographs from the Pennsylvania Municipal Convention, an annual meeting of local government officials from across the state, and of a friend who has learned to feed wild birds from her hand.
On May 31, he wrote about dressing respectfully for Mass.
“God loves us no matter how we are dressed,” he wrote, before adding, “dressing nicely and modestly shows the depth of our love for Him.”
“It’s not a rejection of the world; it’s a true loving of the world,” he said of his willingness to guide his flock – whoever they may be – with correction as well as affirmation.
“You have to love them with everything you’ve got,” he said. “We have to say, ‘You know, all the things you’re looking for, and thirsting for, and sometimes maybe being upset at us about, it really can be found in the Gospel.’ That’s going to cause at times a confrontation, but didn’t our Lord say that that was going to happen?”
Monsignor Baker acknowledged that partner bishops from all over continue to seek out the priestly formation offered at the Mount.
“We’ve always had a very clear and dynamic orthodoxy in our teaching,” he said.
Though his academic and pastoral backgrounds qualify him to lead a seminary, he said he was “shocked” to learn of his appointment, made official July 9 by Archbishop William E. Lori, chancellor of the seminary.
“If I had seen the position advertised in a Catholic magazine,” he said, “I would have just turned the page. … Ultimately, it is all providence. His will pervades human history and everyone’s personal history.”