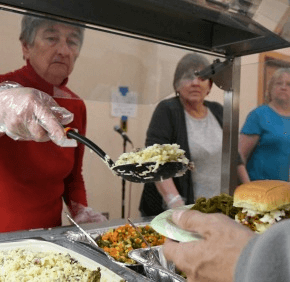 Art therapy is part of the program at St. Elizabeth School in Baltimore. (Olivia Obineme/Special to the Review)|
Third in a series
Editor’s Note: Inspired by Matthew 25:40-45, which concludes ” … what you did not do for one of these least ones, you did not do for me,” each month in 2017 the Review will provide an in-depth look at the Catholic Church’s response to those in dire need.
Teachers at St. Elizabeth School in Baltimore and Villa Maria School in Timonium, Catholic institutions that educate children with special needs, tend to arrive with the intent of establishing experience and credibility in their field.
Later, they find there are no better places to put those acquired skills to work.
“I can’t imagine doing anything different,” said Doug Loftus, 28, who began his career as a teaching assistant at St. Elizabeth and has taught at Villa Maria the past four years. “I feel like I make a difference – you get a bunch of tough days, but you just need to see the lightbulb click every once in a while.”
Villa Maria, operated by Catholic Charities of Baltimore, educates approximately 90 students, ages 5 to 15 and in kindergarten through grade eight, at its location off Dulaney Valley Road.
“Primarily, we serve students with emotional disabilities,” said Aggie Callahan, director of education. “Most have some sort of psychiatric diagnosis.”
St. Elizabeth, located in the Ednor Gardens-Lakeside neighborhood, educates 116 students, ages 6 to 21 and in grades one to 12.
“We have students primarily with moderate to mild intellectual disabilities,” said Christine Manlove, executive director.
Some have mobility issues; the majority are fully ambulatory.
Answering the call
“This was supposed to be a three- to five-year plan,” said Callahan, who has been at Villa Maria for 15 years, starting in the classroom before moving on to coordinating students’ individualized education programs (IEPs) and finally her leadership role. “I can’t imagine walking away from these kids.”
Loftus, a parishioner of St. Michael in Overlea, said, “There’s a little bit of, ‘If I don’t do it, who will?’?”

Doug Loftus, an eight-grade teacher at Villa Maria, spreads good humor in his classroom. (Olivia Obineme/Special to the Review)

Parents and guardians of children with special needs wrestle with the same question.
Laura Hatcher, a parishioner of Church of the Nativity in Timonium, said her son had to pass a “system of failure,” demonstrating he needed more support than available at conventional public schools, before the family could research specialized schools.
As they started looking, the family found that many options would have more than met Simon’s clinical needs, but something was missing.
“They literally followed them around with clipboards,” she said of one institution, albeit acknowledging it as “a great place” where Simon still receives certain services.
“I think when you have a kid like Simon … you spend a lot more time in medical settings,” Hatcher said. “You sort of lose sight of the individual child, and what makes them special and happy and tick.”
Like family
When the Hatchers toured St. Elizabeth, Simon, who doesn’t go many places without his drumsticks, first visited a music class.
“He loves music, and they cared that he loved it,” Hatcher explained. “They focused on what he likes, and on his strengths. … It felt like home. It felt like a family.”
That is “a pretty universal statement,” according to Debra Boyce, coordinator of the elementary and middle school programs, who oversees seven teachers on her team who began as teaching assistants.

Christine Manlove, executive director of St. Elizabeth School, shares a laugh with Michael Addison, aka “The Mayor.” (Olivia Obineme/Special to the Review)

“They grew up with us – it’s kind of awesome,” she said.
Boyce noted another source of St. Elizabeth School’s family feel.
“I think it’s due to our Franciscan culture, our charism,” she said, referring to the school’s founding by the Franciscan Sisters of Baltimore, a religious community that later merged with the Sisters of St. Francis of Assisi. The order still sponsors the school.
Sister of St. Francis of Assisi Jerome Lacy, who retired last year after serving as a teacher, library assistant, teaching assistant and kitchen worker, said St. Elizabeth has grown in depth and breadth over her “37 wonderful years.”
“I’ve seen so much improve, but there’s been one constant,” she said, “and that’s the dedication of Dr. Manlove and all the staff.”
Student Michael Addison, who staff and classmates call “The Mayor,” agreed.
“We’ve got really good people here,” said Addison, 21, as he enjoyed a lunch he had prepared with the help of Kay Cronin, who teaches job readiness and home management.
Addison uses a wheelchair and is gaining work experience at Old Navy in Catonsville thanks to St. Elizabeth’s transition department. It has also secured student internships at Atwater’s, the American Visionary Art Museum, Marshalls, Petco and other business partners.
Caring and competent
As at St. Elizabeth, a guardian of a child enrolled at Villa Maria, who did not wish her name to be made public, praised the staff members who educate the 13-year-old.
He suffers from severe attention deficit hyperactivity disorder (ADHD), as well as oppositional defiant disorder, she said.
“If you say the sky is blue and he decides it isn’t, that leads to a major meltdown,” the child’s guardian said.
In the past, that might have meant “picking up desks and throwing them across the room.”
When such is fixing to occur at Villa Maria, she noted, sufficient hands and abilities ensure that classroom teaching continues unimpeded. If a child needs immediate psychiatric help, there is no need to schedule an evening appointment; that help is immediately available.
“There’s not one untrained person in this school,” the woman said. “I’ve been impressed by every teacher, aide and staff member.”
Furthermore, she added, “they don’t judge the kids.”
“If you take the time to get to know the kids’ stories, you get perspective,” Callahan explained. “We accept them every day, which they know, and they feel safe.”

Students at Villa Maria receive support from one-to-one aides, such as Nicole Huntley, right. (Olivia Obineme/Special to the Review)

“Some people think they’re unteachable,” Loftus added. “A lot of times, they make a lot of progress. … You can see in the sixth grade a kid might be ‘off the wall,’ and then by eighth grade you’re having a normal conversation with them.”
Pondering his future, the guardian of the 13-year-old prefers the descriptor “average” over “normal.”
“His therapist tells me he’s going to grow up and have a job and get married,” she said. “That’s what I want for him. … I’m not going to be here forever for him, and I want him to be able to stand on his own two feet.”
At St. Elizabeth, Hatcher said she hopes for Simon, her son, to be happy.
“I want him to be loved,” she said. “I want him to be as independent and as fulfilled as he can be, wherever he is.”
He’s getting there. On a recent trip to Disney World, funded by the Casey Cares Foundation, he informed Tinkerbell that he already knows how to fly.
“I already have happy thoughts,” he said.
Also see:
The Least of These: Church helps fight opioid addiction
The Least of These: As weather turns, Davidsonville parishioners open doors, hearts
PrevNext
1 Response