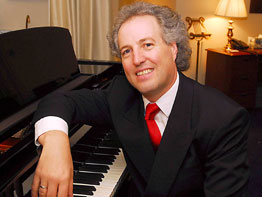 PITTSBURGH – Manfred Honeck, the new music director of the Pittsburgh Symphony Orchestra, said he has come to understand how God has worked in his life and led him to where he is.

He strives to be true to his Catholic faith. “Put God in the center of your life,” he said. “Then everything will come naturally.” Mr. Honeck, 49, attends Mass several times a week.

While he said the Pittsburgh Symphony’s reputation was the most important factor in his decision to accept the new post, he noted that the strong Catholic presence in the area also figured in.

Ms. DeAlmeida said that while most conductors and musicians have their lives consumed by music Mr. Honeck follows a different path. “His motivation is the glory of God,” she said.

Mr. Honeck grew up in a family with nine children in Nenzing, Austria. While the Catholic faith played a role in his family’s life, it was not a focal point for the family.

Mr. Honeck’s mother died when he was 7, and his father kept his faith to himself.

In an interview with the Pittsburgh Catholic, the diocesan newspaper, he recalled wanting to share his faith with his family, but finding no takers he would retreat to the bathroom and other quiet places to pray.

Mr. Honeck said he remembers being ashamed that he hid his faith, and he fought hard to get over his fear of showing it.

The maestro said it is a “pity” that many people are afraid to show their faith by openly praying or using their rosaries in public. He noted that it pains him to see so many baptized faithful who say, “Yes, I am Catholic, but ….”

Among the influences on his faith have been the lives of the saints.

In reading about figures such as St. Augustine and St. Francis of Assisi, he has been impressed that none of them regarded themselves as saints, but rather as normal people.

“There is one goal for them, and I identified myself so much with this goal,” he said. “The goal is God.”

Mr. Honeck and his wife, Christiane, have six children and live in Altach, Austria.

When their home was built he included a chapel in the plans. It gives him a place to pray and for the family to come together in prayer. Clergy often visit to celebrate liturgies or hear confessions.

Mr. Honeck said it is important that his children know their faith background and have the opportunity to obtain eternal life. The maestro added, however, that while his children love to celebrate their faith it does not mean that they are angels, or that he is either. They are all human and have the same problems as any other family, he said.

But Mr. Honeck’s oldest son, Joachim, is a seminarian in Germany. Mr. Honeck said a pilgrimage to Lourdes, France, with his three sons helped Joachim overcome his teenage rebellion and get a new perspective on life.

“We were surprised,” he said of the son’s vocation. “But we saw how he began to live the way of God.”

Mr. Honeck noted that seeing two Little Sisters of the Poor collecting donations at Pittsburgh International Airport was the first time he witnessed something of the area’s Catholic nature.

The maestro has come to know Bishop David A. Zubik of Pittsburgh and Father Ron Lengwin, diocesan spokesman, and has begun to see different aspects of diocesan life.

Mr. Honeck said he is proud to be part of the wonderful group of musicians in the symphony.

Whether Catholic or members of other faiths, many of them have demonstrated a spirituality of their own, he noted.

“I’m just thrilled that he’s here,” said Rhian Kenny, principal piccolo and a member of St. Irenaeus Parish in Oakmont. “I think it’s going to be a great relationship.”