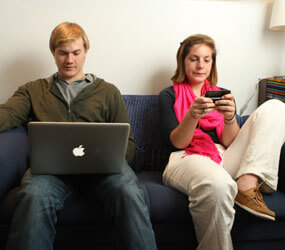 Shoulders shrugged when some Loyola University Maryland students were told that a reporter wanted to talk to them about Millennials.

“There were a couple of people in the room,” senior Brendan Stack said, “and I don’t think anybody had heard the term.”

Before the college students could pull out their smartphones to Google away their confusion or text a friend who might have the answer, school officials told them that they were part of the Millennial Generation.

A Millennial, a term coined by sociologists, refers to Americans born between 1981 and 2000, who are coming of age in the early 21st century.

Who are Millennials and what do they want? How integral is technology to their lives? How do they their faith and spirituality? Those questions will be explored in a Catholic Review series about Millennials that will culminate before this summer’s World Youth Day.

Stack may never have heard the word Millennial, but he has a firm grasp on his peers and how they differ from their parents’ Baby Boom Generation, the group born in the wake of World War II.

“I just see the world as continuously changing and I’m OK with that,” Stack said, “whereas (Boomers) are very stuck in what has worked for them in the past. They’re very used to what got them to this point. They’re looking for an equation that will work for the rest of their life, whereas I’m OK with just dropping the equation and seeing the changes as a continuous factor.

A Pew Research Center 2010 study, titled “The Millennials: Confident. Connected. Open to Change,” gathered data about “the roughly 50 million Millennials who currently span the ages of 18 to 29” in America.

The study found that Millennials are more educated than previous generations, with nearly 40 percent of 18- to 24-year-olds enrolled in college in 2008.

Tom Arning, a Loyola sophomore, said going to college doesn’t guarantee anything. Many of his generational peers believe they are smarter than previous ones, according to Pew. That doesn’t mean good decision-making follows.

“I think what’s important is using your education, having a good sense of right and wrong, developing your conscience and acting that out in practice,” he said.

Timothy Snyder, Loyola’s vice president for academic affairs, said there is a problem with Millennials going forward. Parents have managed so much of a young person’s life that everything is about task completion.

“This may be the most creatively-challenged generation of all time,” he said. “The counterweight to that is, they’re brilliantly educated in content. They have not rehearsed creativity.”

More than a million youths and young adults are expected to attend World Youth Day in Madrid in mid-August. The vast majority from the United States, including a contingent of about 40 from the Archdiocese of Baltimore, are Millennials. The gathering brings the world’s young Catholics and Pope Benedict XVI together in an emotional display of faith and passion.

Their message will be clear. They are the present and future of the church.

Some Millennials are already setting the tone for the 21st century. At age 26, Facebook founder Mark Zuckerberg is the world’s youngest billionaire, having created a communication platform with 500 million, cross-generational users. As a result of such advances, young people are thinking globally.

“I view the world as smaller than my parents or my grandparents do,” said Loyola University junior Lauren Janniello.

Baby Boomers and Generation X, born in the 1960s and ’70s, believed they could change the world. The degree to which that has occurred, for better or worse, will be determined by historians.

Baby Boomer Scott Miller, director of the Archdiocese of Baltimore’s Youth and Young Adult Ministry, believes Millennials have a shot at positively changing the world.

“But, it is going to depend on the adult community,” said Miller, a father of three who will be leading the Baltimore contingent to World Youth Day. “Are we willing to invest our love, care and support in a generation that has been gifted with more education, tools and possibility, and include them in determining our shared future?”

Snyder said there is one thing that Baby Boomers, Generation X and Millennials have in common.

“The adult generation, the one in charge, always disses the younger generation,” Snyder said. “With the Millennials, some are saying they’re pampered.”

Kathryn Franke, a sophomore at Mount St. Mary’s University in Emmitsburg, said she hears those criticisms. She says previous generations are leaving challenging problems for Millennials to solve.

“I’m hopeful, but a little skeptical,” Franke said. “It seems like a lot of people really don’t have much faith in our generation. When you are coming into something where people aren’t that confident in you, it’s kind of hard. It’s like they’re setting expectations so low that you can’t impress them at all. I think we have a lot of potential. People just need to trust us more.”

The Greatest Generation is identified with victory in World War II, Baby Boomers for stopping the Vietnam War. In similar fashion, are Millennials rallying to a cause?

“The main thing you hear all the time is world peace, but honestly, other than that, I haven’t heard anything about a collaboration of what we’re supposed to do,” said David Cupps, a senior at Mount St. Joseph High School. “We haven’t had a meeting where we say, ‘Hey, here’s what we’re going to do, guys.’ ”