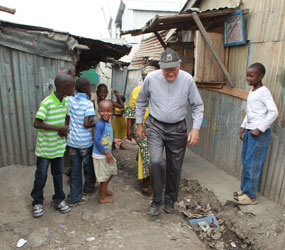 COCHABAMBA, Bolivia – Their numbers are down, their average age is up, and their last names are as likely to be Vu or Gonzalez as Kelly or O’Brien, but one thing that has not changed about Maryknoll priests and brothers in the past century is their commitment to live and work among the poor in distant lands and unfamiliar cultures.

One of Maryknoll’s greatest contributions to Catholic mission has been “seeing and affirming the value and individual worth of all people and all cultures,” Father Raymond Finch, Maryknoll superior general from 1996 to 2002, told Catholic News Service.

“That has been (true) from the beginning, whether it was in China or in Latin America, with indigenous cultures,” said Father Finch, 62, who currently directs the Maryknoll Mission Center in Cochabamba. “Especially seeing the contribution, the worth and the beauty in people who are on the margins and who have been hurt by society, the marginalized, the poor – that has been something that we have been blessed with.”

The mission sites around the globe where Maryknoll priests and brothers work with refugees, AIDS patients, farmers, children and youth may not be what Fathers James Anthony Walsh and Thomas Frederick Price had in mind when they founded the Catholic Foreign Mission Society of America in June 1911 to send missionaries to China.

The first priests arrived in China in 1918, and missions in Korea followed. Political upheaval in those countries forced Maryknollers to leave for a time, and the society expanded to Latin America in 1942 and Africa in 1946.

“We were known as the Marines of the Catholic Church, because we would go to the roughest area and learn the language,” said Father Joe Healey, 73, who has spent most of his life in Kenya and Tanzania.

Father John Conway, 81, echoing the words of one of the Maryknoll pioneers, said: “We come, perhaps, when we’re needed and not wanted, because we’re unknown. We leave when we are wanted, but not needed.”

That sentiment is reflected in the Maryknollers’ goal of beginning works that are then continued by local people.

The legacy remains among thousands of graduates of schools run by Maryknollers, especially in the 1950s and 1960s. Grade schools in Lima, Peru, and Cochabamba, Bolivia, are still known as “Maryknoll schools,” even though it has been decades since a Maryknollers taught there.

Because of their focus on building the local church in countries around the world, the Maryknoll priests and brothers decided from the beginning not to take vocations from the countries where they worked. If a young man in one of their mission parishes felt called to the priesthood, they encouraged him to become a diocesan priest.

As U.S. vocations have declined “young people don’t make lifetime commitments anymore,” Father Healey said – the average age of the priests and brothers has inched up.

Two decades ago, there were 35 Maryknoll priests and brothers just in Peru. Now there are 55 in all of Latin America, and about 20 are over age 70, said Father Finch.

For many older priests, however, “retirement” is a relative term.

While Maryknoll offers retirement at age 65, “hardly anybody takes it,” said Father Conway, who still teaches courses in moral theology and pastoral approaches to chemical dependency and counsels people with chemical dependencies in Nairobi, Kenya.

At age 80, Father John Lange serves as chaplain to the Little Sisters of St. Francis in Nairobi and ministers in the Mukuru slum, visiting the sick with parish health workers.

“I’m a workaholic, so for me to sit around and read is tough,” he said.

The Maryknoll Fathers and Brothers still limit their membership to U.S. citizens, but many of their youngest members are immigrants or children of immigrants to the United States.

“The days of doing things in ‘our mission’ are pretty much over,” Father Finch said. Instead of being in charge of parishes – as most priests were in the beginning – there is an emphasis on teaming up with local partners “to make the few of us that are here go a little bit further,” he said.

Bolivia’s Maryknoll Mission Center provides language courses for people preparing for ministry in Latin America or for Hispanic ministry in the United States, as well as formation for Latin American missionaries, many of whom are laypeople.

Around the world, Maryknollers have branched out into other areas of need, from campus ministry to water rights to human trafficking.

“Creating new ways to be of service … is tremendously challenging, but also invigorating,” Father Finch said.

Amid the upheaval of changing times, Maryknollers find support among the people with whom they work.

Father Gene Toland, 74, who has served in Kenya, Sudan and Chile and now works with the formation team at the mission center, said that in difficult times he is sustained by “the resiliency of the people whom I serve in mission” and “the example of faithfulness, joy and commitment of past missioners – Maryknollers and many others.”

Anyone considering becoming a Maryknoll missioner today needs “an open heart and mind and the flexibility to respond to a variety of unpredictable situations,” said Father Steve Judd, 65, coordinator of the Promotion and Leadership Office at the Mission Center. He said he turns to the church’s contemplative traditions “to keep me grounded in the spiritual life.”

For Father Finch, the seeds of mission sown by the Mission Center reflect the principles that have guided Maryknollers through nearly 70 years in Latin America.

“Mission has to move in the realm of the kingdom of God,” he said. “That has marked Maryknoll’s mission from the beginning – a real sense of going beyond the institutional church and reaching out.”

Father Finch was ordained in 1976, after working as a seminarian among Aymara villagers near Lake Titicaca in the highlands of southern Peru.

“The experience of not understanding, of not knowing, and the blessing of knowing I didn’t know” had a profound impact on his approach to ministry, he said. “That helped me be much more open and not think that I had the answers. Mission is about looking for those answers together.”

Contributing to this story was Barb Fraze in Nairobi, Kenya.