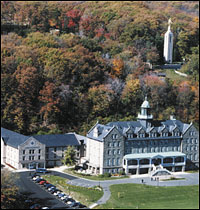 Mount St. Mary’s Seminary, located in Emmitsburg, Maryland, is well-known for its more traditional theology, discipline and rural isolation. It has served as a locus of priestly formation since its inception in 1808.

Mount St. Mary’s Seminary is the second-oldest seminary in the United States. It was founded in 1808 by Father John DuBois, who had traveled to America in 1791 in hopes of escaping the terrors brought about in Europe by the French Revolution. In 1794, DuBois came to Maryland from Richmond after requesting an assignment from Bishop John Carroll. He was immediately sent to Frederick, Maryland. Father DuBois worked hard in his rural area; he established a new church and opened a boarding school for children. Then, in 1808, the Sulpicians closed its preparatory seminary in Pennsylvania and transferred all the seminarians to Emmitsburg. This event marked the formal beginning of Mount St. Mary’s College and Seminary. Seven years later, in 1815, Mount St. Mary’s Seminary was granted a degree of autonomy by the Sulpician superior in Paris.

Enrollment at the Mount grew steadily in the early years. During those early years, the seminary became closely involved with the efforts of Mother Elizabeth Ann Seton. Mother Seton lived on the campus of Mount St. Mary’s at DuBois insistence while her own school was being built.

The year 1818 marked the beginning of trouble for the Mount. The Sulpician Council in Baltimore decided to supress Mount St. Mary’s Seminary because the society lacked the members in the United States to adequately conduct two seminaries and two colleges. The Sulpicians, obviously unhappy with this decision, pleaded with Archbishop Maréchal, so he agreed to allow the Mount to teach theology to seminarians too poor to pay for St. Mary’s Seminary’s Seminary. Maréchal had business that took him out of the country, and upon his return he brought the decision from the Sulpician superior that Mount St. Mary’s could only serve the Sulpician communty as a minor seminary. In 1826, Mount St. Mary’s College and Seminary were stricken from the list of Sulpician institutions of higher learning.

At this point, Maréchal needed to decide whether or not he would allow two major seminaries in the Archdiocese. He was reluctant to supress an institution that was ordaining almost as many priests as St. Mary’s Seminary in Baltimore, and also a flourishing college. After the death of Archbishop Maréchal, his successor found himself in a similar predicament. Archbishop Whitfield granted Mount St. Mary’s a year’s reprieve in 1831, then at the end of the year granted them a two-year stay. Whitfield died before he could make a final decision on the fate of the Mount. His successor, Archbishop Eccleston, gave his assent to the continuation of both instutitions. To further display his support, Eccleston selected John McCaffrey, a newly ordained priest, to head both the college and the seminary in 1838.

More trouble struck the Mount in the latter part of the nineteenth century. The college and seminary was forced to declare bankruptcy. In 1881 a campaign was launched to save Mount St. Mary’s, and Cardinal Gibbons was named treasurer of the fund.

Since that time, Mount St. Mary’s College and Seminary has flourished. In 1968, the present system of governance was replaced by a Board of Trustees. The new Board of Trustees welcomed its first lay members, Henry Knott and James Keelty, Jr. The first lay president was installed three years later, in 1971. Then, in 1973 the college became co-educational. Even today, Mount St. Mary’s continues to grow. What was once a vision of Father DuBois has grown into a thriving environment for clerical and lay alike.