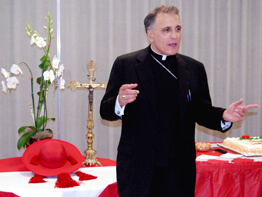 HOUSTON – Cardinal-designate Daniel N. DiNardo of Galveston-Houston called Pope Benedict XVI’s decision to name him a cardinal “very humbling and surprising,” but also said it illustrates the Vatican’s recognition of the church’s growth “in the Southern part of the United States.”

The cardinal-designate, the first from a Texas diocese, made the comments at an Oct. 17 news conference in Houston.

The announcement came at the end of the pope’s weekly general audience Oct. 17. He said he would formally install the cardinals during a special consistory at the Vatican Nov. 24.

“I am deeply grateful to the Holy Father for his kindness in appointing me and for his trust in allowing me to be placed in the College of Cardinals,” Cardinal-designate DiNardo said in his opening statement at the midday news conference at the downtown chancery.

“This is very humbling and surprising. I promise him my fullest communion, loyalty and obedience,” he said.

“I believe that the Holy Father is also honoring this local church of Galveston-Houston, its past and present bishops, priests, deacons, and religious and faithful for their love and loyalty to Jesus Christ and their affection and communion with the see of Peter,” Cardinal-designate DiNardo said.

But he also said his elevation is a sign the Vatican is recognizing the growth of the church in the region.
“The growth of the Catholic population in the Southern part of the United States in recent years is something to be noted,” he said.

Currently there are more than 1.4 million Catholics in the Archdiocese of Galveston-Houston. The explosive growth seen in the archdiocese has been partly driven by the Hispanic population, but there also has been steady growth in the numbers of other ethnic groups.

“I think what the Holy Father and the Holy See are saying is that the whole South and Southwestern part of the United States with its variety of people – obviously a major portion of whom are Hispanic – is a noteworthy and beautiful addition for the Catholic Church in the United States and they wanted to recognize that,” Cardinal-designate DiNardo said.

“What a great honor and joy it is for all of us here in southeast Texas to be so recognized by Pope Benedict XVI,” he continued. “Our great diversity and richness of peoples are matched by our unity of faith and love for the Lord and his church,” Cardinal-designate DiNardo said.

He explained he had found out about his elevation the morning of Oct. 15 while in Oklahoma. He was surprised at the phone call and admitted he was still in “a state of shock.”

“I’ve only recently become the archbishop here and, relatively speaking, I know we have to be careful in saying this, I’m relatively young being 58 years old,” Cardinal-designate DiNardo said, drawing laughter from the media.

He was named coadjutor of Galveston-Houston in 2004; the diocese was elevated to an archdiocese in December 2004. He became head of the archdiocese in 2006 when Archbishop Joseph A. Fiorenza retired.

He took a moment to thank Archbishop Fiorenza, who was at the press conference.

“For 20-plus years,” Cardinal-designate DiNardo said, this “native son” was “a superb shepherd of this local church. He watched Galveston-Houston practically double in size and met that with excellent pastoral initiatives.”

He added that while he will end up “wearing the red … it belongs equally to priests, deacons, religious and past shepherds, of whom Archbishop Fiorenza, to my mind, is a model.”

He added, “I’m a kid from Pittsburgh who happens to just be named (a cardinal), but I’m honored and humbled to be in such company.”

Answering a question from the media, Cardinal-designate DiNardo expressed hope that perhaps his new title would inspire young men to pursue a priestly vocation.

“The more the merrier! If in fact any of my work or enthusiasm can inspire them toward the priesthood, I say blessed be God. I would love it,” Cardinal-designate DiNardo said.

The newly-named cardinal also asked the faithful to keep him in their prayers in the coming days and years as he assumes more responsibility in the universal church.