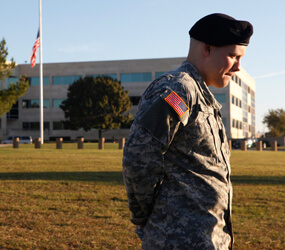 BEAUMONT, Texas – “We hope and pray that our soldiers do not die on the battlefields. Then something like this happens on one of our bases by a fellow soldier,” said Bishop Curtis J. Guillory of Beaumont about the Nov. 5 shootings at the Fort Hood Army base in Texas that left 13 dead and another 30 wounded.

“What happened today is a tragedy. Our prayers are with those who are affected and their families, and I pray for comfort and healing of those who were shot,” he said.

The base is located in the area covered by the nearby Austin Diocese.

Suspected in the shooting at the base is Maj. Nidal Hasan, 39, the Muslim, Virginia-born son of Jordanian immigrants who was scheduled to go soon on his first deployment to the Middle East – a deployment he had sought to avoid.

The shooting began around 1:30 p.m. The casualties took place at the base’s Soldier Readiness Center where soldiers who are about to be deployed or who are returning undergo medical screening.

Lt. Gen. Bob Cone said at a Nov. 5 press conference the shooter used two handguns in the attack. A dozen soldiers and one civilian were killed.

Inside the processing center, soldiers were preparing for deployments to both Iraq and Afghanistan. Cone said he did not yet have information on which units were inside at 1:30 p.m., when the shooting took place.

“These are men and women who made the selfless and courageous decision” to risk their lives in the service of the nation, Obama said. “It is horrifying that they should come under fire at an Army base on American soil.”

“We are all praying for those who were wounded and hoping for their full and speedy recovery,” said Vice President Joe Biden. “Our thoughts and prayers are also with the entire Fort Hood community as they deal with this senseless tragedy.”

House Speaker Nancy Pelosi, D-Calif., called the shooting at Fort Hood “an unspeakable tragedy for the families, soldiers, civilians and support staff on the base. Our brave men and women in uniform train day in and day out to preserve our security. They should never have to face the forces of violence here at home.”

James Zogby, a Catholic who is founder and president of the Arab American Institute and a prominent pollster, said in a Nov. 6 statement: “We at the Arab American Institute are horrified by this tragic and senseless act of violence committed by a disturbed individual. We grieve with the families of those who died and those who were wounded. Our thoughts and prayers are with them.”

“We condemn this cowardly attack in the strongest terms possible and ask that the perpetrators be punished to the full extent of the law. No religious or political ideology could ever justify or excuse such wanton and indiscriminate violence,” said a Nov. 5 statement from the Council on American Islamic Relations.

“The attack was particularly heinous in that it targeted the all-volunteer Army that protects our nation,” the statement said. “American Muslims stand with our fellow citizens in offering both prayers for the victims and sincere condolences to the families of those killed or injured.”

Fort Hood is the U.S. military’s largest installation and the only Army post in the United States that houses two armored divisions. It’s home to the 1st Cavalry and the 3rd Corps, the Army’s official counteroffensive force.

About 65,000 soldiers and family members live on the post, which is halfway between Waco and Austin.