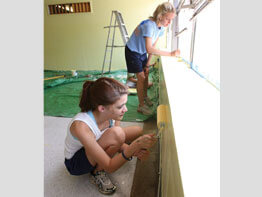 Sweat trickled down the teens’ paint droplet-covered faces, and dirt was embedded in their fingernails. Their hair was tussled, and they were tired after days of hard work in the blistering sun.

In most other situations, the teenagers working to renovate the Head Start-Northwest building on Park Heights Avenue in Baltimore might have been worried about how they appeared to one another.

The participants in the Baltimore Appalachia Work Camp in late June were amongst friends, however, both familiar and new. In just a few days, the makeshift group from parishes throughout the Archdiocese of Baltimore transformed the Society of St. Vincent de Paul run-center for pre-school-aged children into an inviting learning area.

“You can see just how thankful people are for what we’ve done,” said Emily Klima, an 18-year-old recent graduate of Mercy High School and a member of St. Francis of Assisi, both of Baltimore, “I love coming (to work).”

Throughout the week of June 23, work camp members were spread across 15 different sites in Baltimore and in Appalachian areas in West Virginia in an effort to revitalize homes and gathering places of people in need.

The work camp has become a popular annual event for archdiocese teens.

“We’ve got 140 kids between Baltimore and Appalachia,” said Mae Richardson, one of the work camp’s organizers and coordinator of youth ministry for Sacred Heart, Glyndon. “We’re just trying to stay in the community, trying to give back to the community and giving young people very different opportunities. There’s a mentality that sometimes you have to go away to help people … but urban poverty is something we need to address.”

For Ms. Klima, it was her fourth time participating in the work camp project. Local teens like Sara Dorrance, Beth Mahr and Sarah Thompson were rookies. Yet, they fit in with veterans like Mark Dushel, 16, of Our Lady of the Chesapeake, Lake Shore.

The teens maintain the bonds formed will endure beyond the week of service.

“They stay in touch on Facebook all year, regardless of what parish they’re from” said Ms. Richardson, referring to a popular Internet site. “That is saying a lot about our Catholic community.”

Head Start-Northwest program director Arnette Booker and Cheivon Grifin, the education coordinator, were in utter disbelief as they surveyed the work their visitors did on a nearby playground.

Gone were the overgrown shrubs and weeds that grew wildly in front of a drab brick wall. The teens brightened up the wall with a freshly painted mural depicting trees and sunshine for the city’s young children

“I want to go over there and play,” Ms. Griffin joked. “The children are already excited about being outside, and this will just elevate it.”

The students of Head Start should be enthusiastic about their classrooms, which were re-painted while old bookshelves were repaired. The enthusiasm of the youth reinvigorated Head Start-Northwest, Ms. Booker said.

“This is something we really wanted to have done,” Ms. Booker said as she surveyed a hallway. “It’s just a wonderful thing that they can come and they have chosen us to do it.”