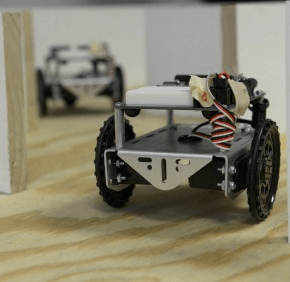 By Cameron Rogers
Special to the Review
ANNAPOLIS – Last winter the elementary school, which has approximately 800 students, was certified as the first Common Sense Digital Citizenship School in Maryland for its courses on the benefits and responsibilities of internet use.
St. Mary’s High School, meanwhile, is implementing the St. Isidore Cyber Program, which aims to give the approximately 475 students in grades 9-12 an education that combines science, mathematics and other tech-related subjects with the humanities.
“Cyber is so prevalent right now, and we have to make this a part of their opportunities at St. Mary’s,” said Connie Coker, the director of technology for grades K-12 at St. Mary’s. “It is not only consuming technology, but really producing and creating with the technology and the skills they’re learning.”
Interactive learning
Students at St. Mary’s Elementary are  introduced to STEM – science, technology, engineering and math – in various interactive ways.
Kindergarteners learn problem-solving and engineering methods by building block towers. By middle school, lessons involve introductory computer programming, coding and data collection experiments.
Through regular computers and school-distributed iPads, students also learn about cyberbullying, online privacy and plagiarism, among the reasons for its ground-breaking Common Sense Digital Citizenship certification.
“That’s a response to all this power students have,” Coker said. “Parents want to know, how are these devices being used? … Teachers have embraced it (the new curriculums).”
Sandy Gateau has been on both sides of the parent-teacher relationship. Her husband, William, was educated at St. Mary’s, as were their three children. As the media and technology coordinator for the middle school, she has witnessed remarkable change over the decades.
“After 20 years of teaching science, I needed to rejuvenate myself, so that I could rejuvenate the kids,” said Gateau, who is not averse to leaning on their expertise. “It makes me feel good, that they’re not afraid to say they know more than you. You have to be able to listen to your students.”

Hoping to have her robot navigate a maze successfully, St. Mary’s High School sophomore Kasey Feldtmose works with technology teacher Claire Dillon on programming the small device May 23. (Kevin J. Parks/CR Staff)
Applying technology
Claire Dillon, a cyber literacy teacher, described the St. Isidore Cyber Program, named for the patron saint of computers and the Internet, as “a lot more collaborative,” with students working more in groups on problem-solving and critical-thinking assignments.
“Now, I’ll teach them something and have them apply it,” she said. “A lot of this they will be figuring out on their own. I will be guiding them on the side, as opposed to leading the class.”
The Cyber Program’s roots can be traced to a former ninth-grade offering, “Topics in Technology,” which gave students a broad introduction to different applications of technology. It has been replaced by Cyber Literacy. Honors Cyber Science, for 10th and 11th-graders, is another new offering, complementing an existing course, Honors Physics. AP Computer Science will be added in 2017-18.
By then, field experience will also be required. It’s something Kasey Feldtmose, of the class of 2018, and six other rising sophomores from St. Mary’s High gained last summer, at a “Cyber Discovery Camp” at the University of Baltimore.
“We had the opportunity to work with robots, cryptography and liberal arts as it pertains to technology,” Feldtmose said.
Coker said that student interest in a post-ninth grade technology course was high.
“I went to the administration,” she said, “and told them, ‘Listen, there is a need for this. I’m hearing it from prospective families, I’m hearing it from the kids. We have to develop  a program.’ ”
Coker said the omnipresence  of cyber technology drove the program’s implementation.
In addition to science and technology, ethical debates on the impact and roles of cyber technology will be incorporated into certain classes. According to Jamie Schlie, the science department chairman for 16 years, the debates, which will factor in the humanities, a new component of his courses.
“It was just a matter of sections being moved around here and there,” he said. “It really wasn’t much to put this in place, we just needed someone to take it on.”
Schlie was asked to contrast today’s classroom with his start as an educator in 1980.
“I had a blackboard,” he said, “I had chalk, I was lucky if I had a regular projector. We didn’t even have copying machines, it was one of those ditto machines. Then I would store tasks on a (computer) floppy drive, so we’ve come a long way.”
Coker, the director of technology, said she hoped to give students both the scientific skills to use various technologies and the communication skills to explain it to others.
“You need to be able to tell people about it,” she said, “to write about it, to communicate, to persuade. We don’t want to just give these students these skills without giving them the framework to move to the next level.”
Also see:

Cameron Rogers, a summer intern with the Catholic Review, is a senior at Hood College and 2013 graduate of Archbishop Spalding High School in Severn.
PrevNext