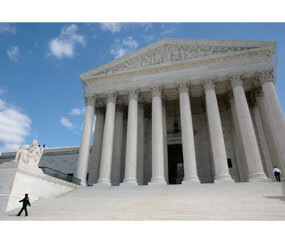 WASHINGTON – The nuts-and-bolts consideration of whether Arizona’s school tuition tax credit program is constitutional, being heard by the Supreme Court Nov. 3, will first have to survive a preliminary question about legal standing.

Specifically, do taxpayers have the right to challenge the Arizona Tuition Tax Credit when no state funds are actually spent, because it just gives a tax credit to those who donate to a scholarship program for private schools?

It has drawn the legal involvement of a wide range of organizations – including tuition scholarship organizations of the dioceses of Phoenix and Tucson and the U.S. Conference of Catholic Bishops – which filed friend-of-the-court, or amicus, briefs. Students attending Catholic schools consistently have received about 95 percent of the funds allocated through the program.

Also weighing in with “amicus” briefs were more than a dozen states, state and national school boards associations, civil liberties groups and a biblical association. Lutheran, Anglican, Baptist, Evangelical, Jewish, Unitarian, secular humanist and atheist organizations have joined in one or another brief arguing their interests.

The case raises general questions about tax credits that benefit students who attend religious schools, as well as specific ones about who benefits from the program in Arizona.

First, though, comes that sticky question of legal standing.

The Supreme Court has ruled that taxpayers generally cannot sue the government over how it spends money. However, a 1969 decision created an exception to that rule when the expenditure involves a possible violation of the Establishment Clause of the First Amendment: “Congress shall make no law respecting an establishment of religion.”

A 2007 ruling said the Establishment Clause exception exists only when the expenditure was established by a legislative body, not the executive branch. In that case, the court said the Freedom From Religion Foundation couldn’t sue the George W. Bush administration for using taxpayer funds to create the White House Office of Faith-Based and Community Initiatives.

Supporters of the Arizona law have argued that it isn’t the Legislature that determines how people spend their tax credits, but the taxpayers themselves, through the tuition organizations, which are not government entities.

The Arizona cases could end with the Supreme Court simply finding that the taxpayers have no right to sue. The 9th U.S. Circuit Court of Appeals said they can.

“The court has recognized that taxpayer standing exists even when a legislature does not directly allocate funds to religious organizations but instead mediates the funds through another agency,” the panel of three Circuit Court judges said.

Should the Supreme Court agree that the Arizona taxpayers have the legal standing to fight the tax credit, then comes the question of whether the 1997 law unconstitutionally advances or endorses religion because a majority of taxpayers who participated gave their contributions to organizations that awarded scholarships to students attending religious schools.

The court went on to say that although scholarship aid is allocated partially through the individual choices of Arizona taxpayers, in practice the program “carries with it the imprimatur of government endorsement,” a boundary line drawn in a 2002 Supreme Court ruling that said church-run schools can be a part of tuition voucher programs.

The USCCB brief was filed jointly with the Union of Orthodox Jewish Congregations of America, the Christian Legal Society, the Council for Christian Colleges & Universities, the Center for Arizona Policy and the Association for Biblical Higher Education. They argued that “the complaint that too many contributions under the program have been directed to religious schools is a complaint that voluntary religion is vigorous among Arizona taxpayers.”

They said that “the percentage of (participating) schools that are religious is irrelevant (because) an immense range of secular options are available to parents through Arizona’s public schools. The calculation whether a state offers genuine secular alternatives … must include the public schools that the state already funds. It does not matter that public schools fall outside the scope of the particular program at issue.”

A brief filed by the taxpayers who sued said the credits are voluntary “only in the sense that taxpayers can choose to pay some of their annual state income-tax obligation to a state-certified (tuition organization), rather than to the Department of Revenue. Taxpayers are not entitled to keep any portion of these ‘contributions,’ or to do anything with them except to pay their taxes.”

The brief further said the program “lacks religious neutrality because the majority of its state-funded scholarships are awarded by religious organizations that decide which children will receive scholarships, and in what amount, on the basis of the child’s religion… most of its scholarships require parents to enroll their children at a religious school in order to receive a scholarship.”

“Under the Arizona program, parents may be denied state scholarship aid because of their religion, or because they refuse to send their child to a religious school,” said the brief by Winn and her group. “The Establishment Clause does not permit government benefits to be restricted in that manner.”