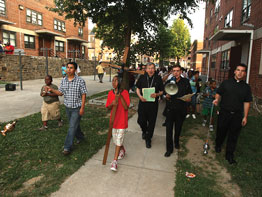 Walter Stokes Jr. showed off pews, stained-glass windows and a sanctuary that were part of the restoration that St. Gregory the Great undertook in 2004, on the occasion of the 120th anniversary of its establishment in West Baltimore.

The second-floor worship space on N. Gilmor Street. offered a vivid juxtaposition to the social ills found in the surrounding blocks, which Mr. Stokes and other members of the St. Gregory community toured on foot during a July 21 Prayer Vigil for the Healing of Violence in our Neighborhoods.

Nearly 100 men, women and children spent 90 minutes on a sticky summer night engaging local residents with prayer, song and testimony outside the steps to St. Gregory and at four nearby stops.

The symbolism resonated in Gilmor Homes, where drug abuse, illiteracy and unemployment have contributed to a Baltimore City murder rate that is among the nation’s highest.

The prayer vigil came five weeks to the day after one at St. Cecilia, two miles to the west, where a parishioner had been hospitalized in a shooting that took the life of a cousin.

A third prayer vigil in the city will be held Aug. 18 at Immaculate Conception. They are in response to an urban summit conduced by the Archdiocese of Baltimore in May, when health and law enforcement officials participated.

“At St. Gregory, we’ve had no recent murders that directly affected our parish, but there are a lot of social issues that confront our residents every day,” Monsignor Nalepa said. “There is still great hope, in the goodwill of our people.”

The Hunts, Andre and Diane, are typical of the approximately 400 families at St. Gregory the Great, as they commute to Mass from their home in a Baltimore County suburb.

“I’ve been a parishioner for 15 years, but my husband has been here nearly all his life,” Mrs. Hunt said. “I started coming with him, and fell in love with Father Damien (Monsignor Nalepa). He knows everyone by name.”

Mr. Hunt, who attended a nearby Catholic elementary school that is long closed, pointed out his childhood home on Vincent Court, the first stop in the prayer vigil. Several decades of decay and despair left him nostalgic, but undaunted.

“I used to play baseball on this playground,” Mr. Hunt said as he walked toward Spray Court on the perimeter of the group, shepherding them through intersections along with a city police officer.

“This was a fantastic place to grow up, and I love coming back,” Mr. Hunt continued. “When my wife and I lived in northeast Baltimore, I used to drag her to St. Gregory. Now we live in Owings Mills, and we still come back. The majority of us here are commuters.”

A young girl skipped by as the prayer vigil began a verse of “This Little Light of Mine.” Minutes later, several children ran to embrace Andrew DeFusco, a seminarian on summer assignment at St. Gregory.

Some participate in a parish summer camp that was to send a busload of children to a recording studio in Baltimore County on July 22, to display what they’ve learned under camp music director Kendall Leonard.

The parish’s outreach also includes a daily pantry, a weekly soup kitchen and meeting space for a chapter of Narcotics Anonymous.

A sign on a wrought iron fence reads “Our Community … Our Responsibility.”

While the Hunts represent those who moved up and out, Mr. Stokes is an exception.

Raised in West Baltimore, Mr. Stokes was worshiping at an east-side parish when he bought a home on Stricker Street in the mid-1990s. He can walk to St. Gregory the Great, where he has been a lector, extraordinary minister of Holy Communion, served on the parish council and is currently the president of the Golden Agers.

“I was born in this neighborhood; it was good to me,” Mr. Stokes said. “I came back, and raised three strong children here. There are a lot of great things that we’ve done here at St. Gregory. We’re not finished.”