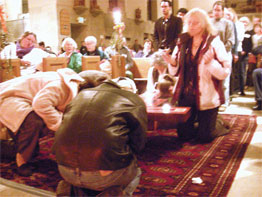 As dozens of flickering candles gently illuminated the darkened church, hundreds of pilgrims reverently approached an icon of the crucifix laid out in the center aisle of St. Mary of the Assumption in Govans Feb. 27.

One by one, worshippers dropped to their knees and rested their foreheads on the sacred wooden image – symbolically entrusting to Christ all their burdens and the burdens of the world.

The powerful moment was part of Baltimore’s first-ever “Pilgrimage of Trust on Earth,” an ecumenical spiritual gathering led by Brother John of the Taizé community in France. Founded in 1940, Taizé is an ecumenical society of religious brothers who take monastic vows and focus their ministry on reconciliation. They use only their first names.

Wearing the white, hooded robe of his religious community, Brother John knelt on one knee and silently watched the pilgrims pray at the crucifix. Moments earlier, he read a Gospel passage and encouraged participants to be open to the Holy Spirit during a 10-minute period of silent meditation.

Throughout the Friday service and others like it during the two-day retreat, Feb. 27-28, pilgrims sang chants, prayed for reconciliation and sought a closer connection to God. They also shared meals and discussions in the parish hall, and had opportunities to receive the sacrament of reconciliation or counsel from priests and ministers.

“The whole experience was very soothing and comforting and mesmerizing,” said Carole Anne Rubicki, a parishioner of St. Matthew in Northwood. “We all came with the same thing in mind. We weren’t focused on divisions or doctrines. We came to pray.”

Anne Dale, a parishioner of Brown Memorial Woodbrook Presbyterian Church in Baltimore, said the Taizé prayer experience was more contemplative than in her religious tradition.

“The whole idea is for us to come together,” she said. “It’s about community.”

In an interview with The Catholic Review, Brother John said his brothers carry on the tradition of Brother Roger, the society’s founder, who sought unity and reconciliation within the Christian Church. Brother Roger was murdered at age 90 in 2005.

“We claim that we believe in a God of love,” said Brother John, a Catholic native of Philadelphia. “If that’s true, then the walls that divide us must be broken down.”

Thousands of people, including many teens and young adults, journey to Taizé each year to pray with the brothers. The brothers also lead dozens of pilgrimages throughout the world.

During the Baltimore service, Brother John read a letter from Archbishop Edwin F. O’Brien offering his prayers of support for the pilgrimage. Auxiliary Bishop Denis J. Madden was one of more than 350 pilgrims to participate in the event that attracted people from as far away as North Carolina and Indiana. The event included representatives from more than 10 church communities representing six Christian denominations.

Building on the success of the St. Mary’s gathering, Taizé Baltimore is planning more spiritual events in the coming months.