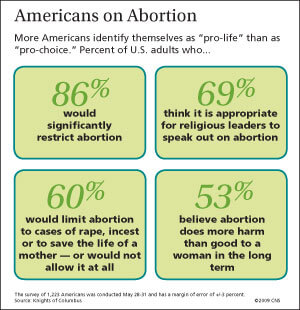 NEW HAVEN, Conn. – Results of a survey conducted by the Knights of Columbus and the Marist Poll show that 86 percent of Americans would significantly restrict abortion.

According to the survey, released July 10, 79 percent of Americans support conscience exemptions on abortion for health care workers. The figure includes 64 percent of those who identify themselves as strongly pro-choice.

Sixty-nine percent of Americans think that it is appropriate for religious leaders to speak out on abortion, according to the survey, part of a Moral Compass series of surveys.

This data and other key findings in the survey show that “the American people are placing an ever-increasing value on human life,” said Supreme Knight Carl Anderson in a statement issued from the Knights headquarters in New Haven.

“Far from the great divide that most people think exists when it comes to the abortion debate, there is actually a great deal of common ground,” he continued.

“Most Americans are unhappy with the unrestricted access to abortion that is the legacy of Roe v. Wade, and pundits and elected leaders should take note of the fact that agreement on abortion need not be limited to the fringes of the debate and issues like adoption or prenatal care,” he said.

The survey of 1,223 Americans was conducted by telephone May 28-31 and has a margin of error of plus or minus 3 percentage points.

Other key findings showed that:

– Sixty percent of Americans would limit abortion to cases of rape, incest or to save the life of a mother – or would not allow it at all.

– Fifty-three percent of Americans believe abortion does more harm than good to a woman in the long term.

– Fifty-nine percent say religious leaders have a key role to play in the abortion debate.

– Eighty percent of Americans believe that laws can protect both the health of the woman and the life of the unborn. This includes 68 percent of those who identified themselves as “strongly pro-choice.”

According to a news release about the survey, the data also showed that since October nearly every demographic subgroup “had moved toward the pro-life position except for nonpracticing Catholics and men under 45 years of age.”

It also said that “the greatest shift to the pro-life position” in that time period was seen among “independents and liberals … while Democrats were slightly less likely to be pro-life now than they were in October.”

According to Anderson, “the American people have reached a basic consensus, and that consensus is at odds with the unrestricted access to abortion that is the legacy of Roe.”

The Marist Poll is part of the Marist Institute for Public Opinion, a survey research center at Marist College in Poughkeepsie, N.Y.