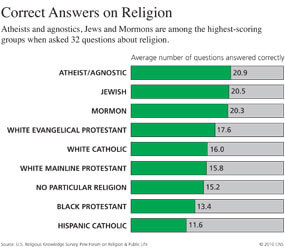 WASHINGTON – Catholics know about as much as Americans in general about religion, getting right only half of the 32 questions in a survey for the Pew Forum on Religion & Public Life.

In the U.S. Religious Knowledge Survey released Sept. 28 at a Washington symposium on religious literacy, Pew found that those most likely to answer the most questions correctly were atheists and agnostics. Panelists suggested that might be the result of the analytical process and study that many people go through before they decide to define themselves as atheist or agnostic.

The questions tested general knowledge about various religions, about U.S. laws affecting religion and about key figures and beliefs of major religions. For instance, overall, at least two-thirds of those surveyed knew that public school teachers cannot lead a class in prayer; that Mother Teresa was Catholic; that Moses was the Bible figure who led the exodus from Egypt; that Jesus was born in Bethlehem; and that most people in Pakistan are Muslim.

Only about half of the entire sample knew that the “golden rule” is not one of the Ten Commandments; that the Quran is the Islamic holy book; that Joseph Smith was a Mormon; that the Dalai Lama is Buddhist; and that the four Gospels are Matthew, Mark, Luke and John.

Fewer than one-third of the whole group correctly answered that most people in Indonesia are Muslim; that public school teachers are legally allowed to read from the Bible in class as an example of literature; and that only Protestants, not Catholics, teach that salvation comes through faith alone.

On the questions specifically about Catholicism, 55 percent of Catholics correctly identified the church teaching about transubstantiation, that the bread and wine used in Communion become the body and blood of Christ during the consecration. Overall, about 40 percent got that question right.