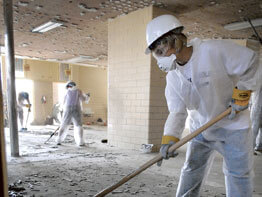 NEW ORLEANS – Dr. David Knight normally treats his hands with tender loving care because they are the pampered instruments of his livelihood.

But the general surgeon from Waterbury, Conn., had to take a break recently when a fellow surgeon saw the blisters on his right hand, cleaned the small wound and wrapped his hand in a gauze bandage.
The surgeons were not in a hospital but in the former St. Cecilia School in New Orleans, which is being converted into a neighborhood health clinic run by the Daughters of Charity.

Knight and about 175 other general surgeons were in New Orleans Oct. 7-11 to attend the American College of Surgeons Clinical Congress. They gave up portions of two days to clear out the school, ripping out ceiling tiles and flooring to ready the structure for what will become a 7,200-square-foot community health clinic with the capacity to accommodate 500 clients per month.

The surgeons called it “Operation Giving Back.”

“As soon as I got the e-mail about the project, I thought this was the best thing ever,” Knight told the Clarion Herald, newspaper of the New Orleans Archdiocese. “I didn’t feel right going to New Orleans and not doing something. This is just perfect.

“One of the things we’re all learning over and over again is that it’s one step at a time. I don’t have the capacity to wave a magic wand and fix everything in the world, but there are some things that you can do,” he said.

“I’m a firm believer in the philosophy of ‘pay it forward,’” he added. “You do something for somebody with the idea that they will take it and be an example for somebody else and go on and do good things. It’s a good thing because maybe other organizations who come here will do the same sort of thing, and before you know it, you’re actually doing something.”

Two Catholic doctors from Little Rock, Ark. – Dr. Anne Mancino, a general surgeon, and Dr. Alison Acott, a surgery resident – were among the 11,000 surgeons who attended the convention. Both women had spent the days after Hurricane Katrina treating evacuees transported to Arkansas for medical care.

“I was on call one of the nights that many of the patients were being evacuated, and our hearts just felt for them,” said Acott, a parishioner at Christ the King Church in Little Rock.

“Some of the patients had pieces of paper taped to their clothes with just a diagnosis or a name, or they had nothing at all,” she said. “Sometimes they were nameless, but it didn’t matter. If they were in a bad way, we loved them and cared for them all the same.”

Mancino said by the time one of the evacuees reached her Little Rock hospital his injured leg was too far gone and he had to have a partial amputation.

“He had been waiting for his surgery and was stuck in a place without power,” Mancino said. “But he was alive, and the people had obviously done an amazing job taking care of him and getting him to that point.”

Mancino said another patient told her she was rescued from her house by a man in a boat and then dropped off at a safe spot.

“Then she looked around and couldn’t even see the guy or the boat any more,” Mancino said. The patient said her rescuer either sped off to help someone or else he was an angel. “Either one is pretty good,” Mancino told her.

The surgeons who participated in the gutting project worked so quickly organizers had to order a fresh dumpster to handle all the debris. Once the building is cleared, the clinic reconstruction can begin. The Daughters of Charity hope to have it open within five months.

“This project resonated with what our mission is – making sure people have access to care and are provided with good care,” said Dr. Kathleen Casey, coordinator for the American College of Surgeons. “I think we’ve certainly met our goals.”

Acott said the project meshed with her Catholic faith. “I was walking back with supplies when I saw the cross on the roof,” she said.

That symbol alone summed up their work for her, she said, saying it represents “love, giving, caring about your neighbor in a time of need.”