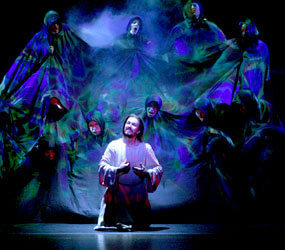 WASHINGTON – Remember seeing “Jesus Christ Superstar” at the movies in 1973? Back then, a 29-year-old fellow named Ted Neeley played Jesus in the film setting of a Tim Rice-Andrew Lloyd Webber rock opera.

Now, in 2009, Mr. Neeley is age 65 – nearly twice the age Jesus was when he was crucified – and still playing the role of Jesus in touring companies of “Superstar” 36 years later.

Why continue? “Because it’s a magnificent show to be a part of,” Mr. Neeley said in a March 13 telephone interview with Catholic News Service from Greensboro, N.C., where he was starring in the current road production of “Superstar.”

“Everything about this show is absolutely remarkable,” Mr. Neeley said. “Audiences everywhere we go are remarkably supportive.”

Mr. Neeley gets some benefit from it, too. “It’s deepened my spiritual commitment, absolutely, infinitely,” he said about performing in “Superstar.”

“I learn something new about the relationship between Jesus Christ and the people who come to see the show,” he said. “Many people tell me they’ve discovered their spirituality through seeing this film or seeing this show,” or have gotten “an element they didn’t seem to understand in church.”

He was a tad evasive about his own beliefs, but Mr. Neeley said he was raised a Christian – without specifying a denomination – and remains one.

“I was raised in a tiny town in Texas. I was in church as much as I was in school all my youth. I learned about Jesus Christ as the Son of God though that experience. I felt I knew as much as anyone else until I got involved in that project,” Mr. Neeley said, referring to “Superstar.”

Mr. Neeley got his start in the performing arts as the drummer for a rock band. “I was never a good drummer; I was just a good guy who can keep time,” he said. He still plays the drums when he’s not on the road, but that’s less frequent.

“Just like every other tour, we planned for a three- to six-month run and we’re touring here in our third year,” he told CNS about his theater performances.

His rock band made its way to New York and, to bring in some money between band gigs, Neeley took to the stage.

Mr. Neeley still holds a great deal of respect for the original double-LP rock opera from 1969. “That’s what we all learned this from – the original brown album. That album was the blueprint for what this piece is,” he said. “Everyone who was involved in the original Broadway production used that, in essence, as its script.”

He said he still gets mistaken sometimes for original Deep Purple vocalist Ian Gillan, who sang the role of Jesus on the LP. But, apart from the occasional Deep Purple faction – he imitated a stoner approaching him, crowing, “Great band! Great band!” – Neeley said “Superstar” fans approach him “all the time.”

“It’s a given now. Someone very gently, calmly, comes up and cries on my shoulder about their experience. It’s never offensive. It’s always with respect,” he said.

Though he had a tickle in his throat during the interview, Mr. Neeley said that singing the part of Jesus – with its several screeching high notes – is as easy now as it was when he started.

“I honestly have no idea (why),” he said about his voice. “I started out playing drums in rock ‘n’ roll bands when I was a child; I guess I toughened it up enough to last.”