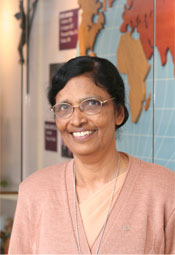 TOLEDO, Ohio – The superior general of one of the largest congregations of vowed women religious in the world believes religious life is changing, but says she has “absolutely no fear” that it will die out.

“The vocations will continue to come, that I believe – because it’s God’s work. People are always there to respond to that, all through history,” said Notre Dame Sister Mary Sujita Kallupurakkathu, a native of Kerala, India, who has led the nearly 2,400 Sisters of Notre Dame in 15 countries since 1998.

“But we have to change our pattern of thinking,” she added. “God is making something new.”

Sister Mary Sujita cited smaller families, increased opportunities for women and a more empowered laity as factors that have contributed to the decline in religious vocations around the world.

Shrinking membership has forced the sisters to shift from thinking in terms of big institutions to consider new ways to be present in the church. She said religious may increasingly play a role as the leaven in society, responding in smaller groups to the needs of the poor.

“It’s not only a matter of (the) number of sisters, it’s not a matter of doing something we always did, but it is a matter of giving our energy where we are needed the most,” said Sister Mary Sujita.

During November and December, the superior general and two members of her general council visited sisters of the Toledo province who serve in a variety of ministries in Ohio, Michigan, Indiana, Florida, Louisiana and South Carolina.

She visits each province once every six years to meet with individual sisters, learn about their ministries and discuss the emerging needs they see in their communities.

Across the international congregation, the superior general has observed a growing desire to reach out to the poor, especially women, in the fields of education, health care and social services. She notes this development is not new for the sisters, but a return to their roots.

Sisters from the Toledo province serve in parishes and teach in Catholic schools, but have also branched into ministries like Double ARC, a nonprofit organization they founded in 1992 that provides specialized services to children at risk for classroom failure, including children with fetal alcohol spectrum disorders.

At Women Blessing Women, founded by Sisters of Notre Dame and other area congregations, the sisters and other volunteers work to provide job, education and empowerment skills to women living in poverty.

The congregation has also applied for nongovernmental organization status at the United Nations so the sisters can advocate for women and children in need throughout the world.

Sister Mary Sujita said the sisters continually challenge themselves to see what more God is asking.

“I like that search and quest for more,” she said. “I always call it the holy restlessness inside.”

The Sisters of Notre Dame serve under a variety of conditions in different countries, but Sister Mary Sujita says their mission remains the same: to be Christ to the world today.

“The heart of the mission is to see the individual and the society through the eyes of Jesus, and to give a response that is fitting,” she said.

She is careful to avoid comparing the countries where sisters serve, because she said poverty must be “understood in the context of the country’s situation.”

The conditions she witnessed while working among the poorest people of India for many years were far more extreme than anything she would ever encounter in the United States, Sister Mary Sujita said. Yet, in the more developed nation, poverty and subtle racism still persist and must be addressed.

Sisters in the United States have made concrete steps to be with those people living on the margins of society, she said.

“We cannot change the world, but there is something beautiful that we can contribute to that transformation,” she added.