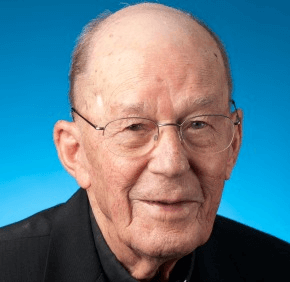 By Catholic Review Staff
A funeral Mass for Sulpician Father Claude H. Dukehart was offered Sept. 19 at Our Lady of the Angels Church in Catonsville. Father Dukehart died Sept. 14 at 99. He was believed to be the oldest priest living in the Archdiocese of Baltimore.
Born in Baltimore in 1917, Father Dukehart was one nine children, one of whom would also become a Sulpician.
Father Dukehart was ordained to the priesthood for the Archdiocese of Baltimore June 8, 1943, having completed his preparation at St. Mary’s Seminary in Baltimore. He would go on to earn a master’s degree in philosophy and a doctor of sacred theology from The Catholic University of America in Washington.
As a Sulpician candidate he taught Latin, French and religion at the former St. Charles College in Catonsville from 1943 to 1945.
He was admitted to the Society of St. Sulpice in 1946 and joined the faculty of St. Mary’s Seminary and University, teaching dogmatic theology, canon law and Greek from 1949 to 1960.
He then taught at the former St. John’s Seminary in Michigan and the former St. Thomas Seminary in Washington state.
After the close of the Second Vatican Council, Father Dukehart retired from training to become chaplain for Veterans Administration hospitals in California, New York and Arizona.
He retired in 1987 but continued to reside in Phoenix until 1995, when he moved to St. Charles Villa, the Sulpicians’ retirement residence.
Read more obituaries here.
PrevNext