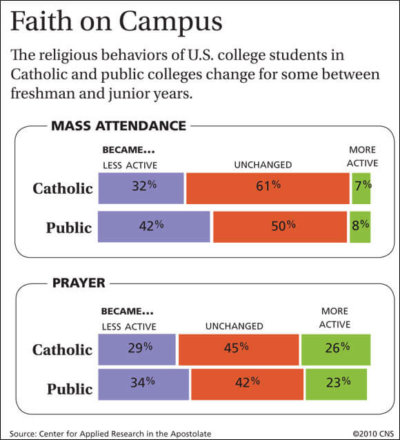 WASHINGTON – A new study finds Catholic students at Catholic colleges are less likely than Catholics attending public colleges to move away from the church’s teachings on a variety of issues.

However, on the issue of same-sex marriage in particular, newly released research from the Center for Applied Research in the Apostolate found that many Catholic students at Catholic and public colleges disagree with church teaching.

CARA, which is based at Georgetown University, presented the results of its “Catholicism on Campus” study Jan. 31, during the annual meeting of the Association of Catholic Colleges and Universities, held in Washington.

The CARA report relied on national surveys of the attitudes of 14,527 students at 148 U.S. colleges and universities, conducted by the Higher Education Research Institute at the University of California at Los Angeles.

“We measure whether students, regardless of their incoming attitudes and behavior, move closer, stay the same, or move further away from the church while in college,” the study said.

CARA classified its research into two groups. The first covered beliefs and attitudes about social and political issues, including abortion, same-sex marriage, the death penalty and reducing suffering around the world. The second focused on religious behavior, such as frequency of attendance at religious services, prayer, reading of religious texts and publications.

Regarding same-sex marriage, the study said there is no other issue on which Catholic students – regardless of where they attended school – moved further away from the church. Only one in three Catholics on Catholic campuses disagreed “somewhat or “strongly” that same-sex couples should be allowed to marry. Catholics on non-Catholic campuses were slightly less likely to disagree.

“This issue more than any other may be strongly affected by the millennial generation’s post-materialist view regarding marriage and sexuality,” said the study’s authors, Mark Gray and Melissa Cidade.

They said their analysis showed that while Catholic students at Catholic colleges may move away from the church on some issues, they move closer to the church on others.

Like Catholic students at most public colleges, they moved toward agreeing with the church’s position on the need to reduce the number of large and small weapons and its view that federal military spending should not be increased.

The study found that as Catholic students at Catholic colleges advance in their education, they often “remain profoundly connected to their faith.”

In their junior year, 87 percent of them said following religious teachings in everyday life was “somewhat important” to them, and 86 percent said their “religiousness” did not become “weaker” in college.

But the study also found that Mass attendance declined during the college years among almost a third of Catholics at Catholic colleges, but at non-Catholic colleges, the percentage jumped to nearly 50 percent.

“Disturbing as these figures are, they should not be a surprise and should not be interpreted as a specific outcome of students’ attendance at a Catholic college or university,” said Richard A. Yanikoski, president of the Washington-based ACCU.

“Catholic campuses serving a broad cross-section of students can only do so much to redress such a collection of antithetical influences,” he said. “We know full well that our own capacity in some ways is weaker now than it was when priests and vowed religious were more numerous on our campuses.”

Though this study does not dispute many of the findings from a 2003 study commissioned by the Cardinal Newman Society – a Manassas, Va.-based Catholic college watchdog group – about the attitudes Catholic college students hold about abortion and same-sex marriage, it does suggest they are less likely to move away from the church than students attending non-Catholic institutions.

Patrick J. Reilly, president of the Cardinal Newman Society, said in a Feb. 2 statement that if ACCU officials think “it is a happy fact that Catholics lose their faith somewhat slower at Catholic colleges than elsewhere, then they fail to appreciate the concerns of faithful Catholic families.”