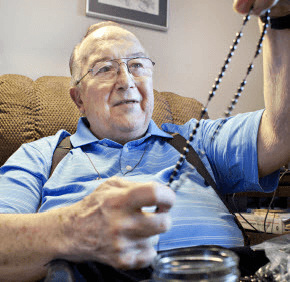 WASHINGTON – A group of 12 students from the Newman Center at George Washington University prayed the rosary March 3 outside of the White House, as a prayerful witness for the religious freedom they believe is threatened by a federal contraceptive mandate.

The U.S. Department of Health and Human Services has issued a requirement that health insurance plans include free coverage for sterilizations and contraceptives, including some drugs that can cause abortions.

The students walked from their campus to the White House five blocks away, following a “Mass of Conscience” celebrated at the Newman Center’s chapel by Father Greg Shaffer. The group had lunch together at the center and then headed out.

While on their walk, three of the women held signs that together read, “Protect Religious Liberty.” They walked through the center of campus past other students who were milling about in mild weather on a Saturday afternoon.

“This event is important to raise awareness … (about) the government threatening the religious liberty of a specific group of people,” said Michael Russo, the student president of the Newman Center, who is studying history and classics. “It (the students’ witness) attaches faces to the issue. It shows people are impassioned about it and willing to stand for the issue, especially on a campus like GW, which isn’t religious.”

That point was echoed by Chris Crawford, a political science major who helped organize the prayer vigil.

“We organized this (because) we got upset with the mandate,” he told the Catholic Standard, newspaper of the Washington Archdiocese. “We saw it as an affront to religious liberty. We’re in the middle of a city and a campus where we feel like we’re standing alone a lot. This was the tipping point.”

The fact that students were publicly standing up for religious freedom, Crawford said, “sends a good message, that this movement is coming from GW We are on a really secular campus.”

Prayer, he said, is “very important” in such an effort. “That’s at the center of it all. It broadens the message and strengthens it. It brings it beyond politics.”

As the students walked closer to the White House, Kara Dunford, a political communications major, said: “(It’s) important for us at the Newman Center, as college students, to get involved in issues that are important to our future as Catholics in the United States. Particularly on this issue, it’s important for us to send a message (that) it’s not just bishops and priests who care about this HHS mandate, it’s us as college students. We realize this encroaches on our liberties as practicing Catholics.”

Dunford said the fact their witness was centered on prayer is critical. “What we’re trying to show is all church teaching is rooted in love. It’s not bigotry. It’s not hate. Starting with a Mass, and ending with a rosary, we can show it. We’re not out there screaming with signs.”

Justyna Felusiak, who is studying political science, said, “I just feel like everyone has the constitutional right to religious freedom. This is beyond me being Catholic. It’s what our country was founded on, and why people came here. It’s been (our) tradition and our law since the country started.”

She, too, emphasized the importance of prayer in the effort: “As a Catholic, I feel that’s a great solution to many situations and problems.”

Joining the students was Bryce Garber, a lay missionary from the Fellowship of Catholic University Students who is serving at the Newman Center. “I believe in the freedom of religious expression laid out in the Constitution, and I don’t think the government has any right stepping into that,” he said.

Then the group arrived on the sidewalk in front of the White House, and they quietly prayed the rosary together, as tourists walked by and some people took pictures of them. About a block away, protesters highlighting an international issue used a loudspeaker to direct their message toward the White House.

After they prayed the rosary, the students and their friends walked together back to campus.

Christina Longofono, a history major, emphasized the importance of prayer in the effort to protect religious freedom. “Jesus said, ‘I am the vine, and you are the branches. Apart from me, you can do nothing.’ It’s very important that we not only acknowledge God, but involve him in our efforts to protect our right to worship him.”

On Tuesdays, she joins other Catholic students in praying the rosary outside an abortion clinic on campus, and sometimes people curse at them, so Longofono said she wasn’t worried about what reaction their prayer vigil this day would provoke.

“This isn’t an issue that just faces Catholic Americans. It faces all Americans,” she said. “If the government can take away the (religious freedom) rights of one people, it can take away everyone’s rights.” she said.

As she walked with her friends back to campus, she added, “Culturally, this is not a popular issue. It’s important that we do what’s right, even when everyone is not on our side.”