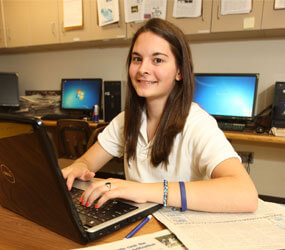 BEL AIR – Kate Froehlich figures that journalism will thrive, as long as the field is blessed with curious people who are conscientious about keeping the public informed.

Froehlich should know. She’s one of those folks passionate about the gathering and dissemination of accurate, balanced news.

A recent graduate of The John Carroll School in Bel Air, Froehlich will study business administration and journalism at American University.

She’ll go to Washington, D.C. armed with a Maryland-Delaware-D.C. Press Association scholarship for student journalists, 140 web bylines she produced in her senior year and an insider’s knowledge, having served as a Senate page during the 2010 Maryland General Assembly.

“I’m a very curious person, I like to know information that no one else has access to,” Froehlich said. “I like to find a face to a story. It’s a crucial job. Someone needs to inform the student body. I’ve been blessed, because the administration has been willing to work with journalists and the student body.”

She earned that trust.

As executive editor of The Patriot, a newspaper that prints six issues a school year but updates the issues with rapid frequency on the school’s website, Froehlich had weekly meetings with Richard J. O’Hara, the president of John Carroll, and Paul Barker, its principal.

“Rather than hear rumors, the newspaper staff became the first ones to know,” Froehlich said. “I guess I wasn’t intimidated. We met so often, it was enjoyable. After a while, I knew what to ask.”

They briefed her on developments in and around the school. She honored embargoes and gained insight into the rationale behind different plans and procedures for the only Catholic high school in Harford County.

“Seniors have multiple demands on them and I always worry about the consistency of the commitment from my leaders, but Kate sets the standard for all editors,” said O’Hara, a former adviser to The Patriot.

“Kate,” he continued, “and her fellow senior editors produced a paper this year that is consistently balanced in its approach. Kate will take on tough issues, but there is not a hint of ‘gotcha,’ tabloid journalism in what she does.”

Froehlich has known what she’s wanted since the day in the late 1990s when she informed her class at Youth Benefit Elementary she wanted to be president. Her parents, John and Lisa, encouraged her to join political discussions at the dinner table, conversation that went a long way toward her being one of five Harford County high-schoolers to intern as pages in Annapolis last winter.

On the journalism front, Froehlich was on the staff of the Inkwell at Fallston Middle School all three of her years there, rising to editor in chief as an eighth-grader.

Introduction to Journalism taught by Nick Attanasio, which she took as an elective during her sophomore year, further piqued her interest.

Encouraged by journalism moderator Mark Ionescu and utilizing on-line initiatives that had been developed under the senior project of Natalie Shaw, a member of the Class of 2009 who’s now at the University of Baltimore, Froehlich made the John Carroll student news website a must read.

“Every day, Kate simply looked at what needed to be done and made sure that problems were solved,” Ionescu said. “When news broke and someone needed to write a last-minute story, Kate did it. When all the photographers were missing before a speaker’s visit, Kate grabbed a camera.

“Her instincts and tenacity in pursuing stories are among the finest I have ever witnessed.”

She became an authority on the master plan that will direct the future of John Carroll, but Froehlich also paid homage to the past. Her own senior project centered on preserving the oral history of the school, as she interviewed veteran teachers like Gary Scholl and Dick Paaby, tapes that will be entered into the school archives.