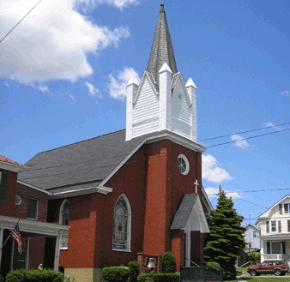 In a March 3 letter to parishioners, Monsignor Robert J. Jaskot, pastor of St. Francis as well as St. Mary in Petersville (the two churches comprise a single parish, St. Francis-St. Mary) wrote that an assessment by Matonak, Snyder and Associates, a Hagerstown structural engineering firm, revealed that the state of the foundation and structure of St. Francis was “far worse than anticipated.”

The findings were confirmed by a second firm, Adtek Engineers of Frederick.

Monsignor Jaskot wrote that making the building safe for occupancy, and going no further, would cost several hundred thousand dollars, a figure “beyond our means.”

“Given the threat to health and safety posed by the structural instability of the building and the associated costs of the needed repairs, it is necessary immediately and permanently to close the church building,” Monsignor Jaskot wrote.

He added that Nolan McCoy, director of facilities and real estate for the Archdiocese of Baltimore, and Christin Kinman, archdiocesan project manager for Western Maryland, had concurred with the decision, as had Bishop Adam J. Parker, auxiliary bishop of Baltimore, and Monsignor James W. Hannon, western vicar.

“We put the safety of the people who use that building at the forefront of the decision,” McCoy told the Catholic Review.

He said a basement had been excavated under St. Francis sometime after the church’s 1904 construction to accommodate a coal furnace, exposing the building’s rubble foundation.

“Probably sometime after it was built, they needed to get heat in there, so volunteers showed up with shovels and pickaxes,” McCoy said.

The “old, country church” and others like it were constructed with simple foundations, he added. Trenches were dug a few feet deep, stones were stacked inside, and trusses were laid across.

Because the excavation exposed the foundation under St. Francis, “those stones are falling into the basement, and there’s nothing holding up the church anymore,” McCoy said.

A Mass was celebrated March 4 at St. Mary, with Bishop Parker and Monsignor Hannon available to answer parishioners’ questions.

The parish has long held Sunday Masses, at 8 and 10 a.m., at St. Mary. Before St. Francis church was closed, Masses were celebrated there Wednesday (9 a.m.) and Saturday (5 p.m.).

“With gratitude to God and our predecessors, we have another building to meet our immediate and long term needs,” he wrote, adding that the St. Mary church building “was constructed in a better manner and there are no structural concerns (even though the building is older).”

The assessment that revealed the structural problems at St. Francis was part of a larger initiative that looked at both church buildings and other parish properties.

“As you know, since my arrival, first as administrator and then as pastor, it has been our goal to review where we are as a community and then to set priorities accordingly,” Monsignor Jaskot wrote.

He called the closure of St. Francis “a great loss for many in our community.”

“Within these walls, we have said farewell to those who have died, and supported one another through challenging times,” he wrote. “Many families have been members of the parish for generations and the building has been a part of our community for over a century.”

Monsignor Jaskot added, however, that the Catholic Church is “not a structure of bricks and mortar, but a community of living stones, believers on life’s journey.”

“Our work as a Christian community must continue,” he wrote.

Monsignor Jaskot also serves as pastor of Holy Family Catholic Community, a Middletown parish, which, as part of the archdiocesan pastoral planning process, has been grouped with St. Francis-St. Mary to form a pastorate.

“The conversation on our needs will continue so that St. Francis-St. Mary will move forward reaching out to those around us to make disciples as Jesus has commanded us,” Monsignor Jaskot wrote. “Our recent efforts, including working together with Holy Family as a unified pastorate, will assist us.”

As for St. Francis Church, “We will be determining what can and should best be done with the building to serve our needs,” he wrote.

Archbishop Lori to pastoral planners at MAC: Is your blueprint Babel or Pentecost?