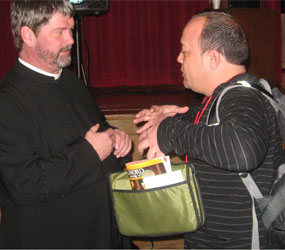 Some came to hear the speakers, others to see old friends. Still others came seeking spiritual growth and renewal.

All told, about 225 participated in the Catholic Men’s Fellowship of Maryland’s 13th annual conference March 20, on the campus of Immaculate Conception Parish in Towson.

This year’s theme, “Answer His Call,” had something for everyone.

Father Tom Euteneuer spoke of spiritual fatherhood and spiritual warfare, and the dangers for our society when strong father figures are missing from the family.

Father Rick Wendell told the amazing story of his out-of-body death experience, which led him from the party life to joining the seminary.

And Catholic theologian and nationally-syndicated columnist George Weigel discussed the new anti-Catholicism and the secularist agenda.

“It’s a whole day of fellowship,” said Demian Seeley of St. John in Westminster. “In our busy lives, it’s rare that men can get away and do ‘good’ things.”

“It’s good to see guys you haven’t seen in a long time,” said Bill Jauquet of Our Lady of Victory in Arbutus. “It’s a good opportunity to renew your own faith.”

For St. Agnes in Catonsville’s Jim Armshaw, who had not attended the men’s conference in several years, “it was the speakers this year that brought me back.”

Father Euteneuer’s discussion struck a nerve with many who voiced concern over the moral and political direction of our society.

Father Wendell captivated the audience with his dramatic story of returning to life after being clinically dead for nearly three hours in 1990.

“I died at 3 o’clock in the afternoon on a Friday,” said Father Wendell, at the time, a 30-year-old carpenter. “I was in the presence of this light that didn’t start anywhere. I didn’t think about things. I knew there was a God.”

On the Sunday after the accident, Wendell came to a realization.

That experience and a moving trip to Medjugorje, in what is now Bosnia-Herzegovina, where Father Wendell said that Jesus appeared to him, convinced him to change his ways and become a priest.

Weigel said that Catholic laymen and the church’s clergy need to speak out on issues such as gay marriage, abortion and stem-cell research, despite the government’s effort to make those private matters.

“The pro-life movement is the civil rights movement of the 21st Century,” said Weigel, a biographer of Pope John Paul II. “We are not going to quit.”