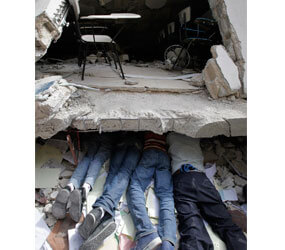 WASHINGTON – Here is a collection of vignettes from Haiti:

One of the tens of thousands of victims in the Haitian earthquake was Salesian Brother Hubert Sanon, 85.

Details surrounding Brother Hubert’s death were unknown, but Father Hyde said he died in the Salesian compound that houses the National School of Arts and Trade, known as ENAM among Haitians.

The Salesian generalate in Rome issued a brief statement Jan. 15 saying that Italian Salesian Father Attilio Stra, the school’s director, “confirmed the destruction” of the trade school and said it was most likely the more than 200 students and several staff members were dead. Father Stra, who was seriously injured during the earthquake, sent an e-mail to Rome saying, “It’s a miracle I’m alive.”

Brother Hubert professed vows in 1947 and worked at the school’s Lakay program for young adults and teenagers on the streets. The program tries to reunite the young adults with their families. For those unable to find their families, the program offers the young people a place to stay and teaches them a trade in preparation for employment.

Father Hyde said Brother Hubert was a graduate of the school and was so impressed with the work of the Salesians that he decided to join the order. (DS)

Sinsmyr, senior translator at an American-sponsored medical clinic in Port-au-Prince, was not exactly sure why his world was falling down all around him the evening after the earthquake hit.

Brent DeLand, a member of Christ the King Parish in Springfield, Ill., who established the SARTHE Medical Clinic, was on the phone with 24-year-old Sinsmyr when a major aftershock shook the Haitian capital.

“Then he sort of understood and I asked ‘What do you see?’ He said, ‘Well, I’m in the middle of the street. In all directions there are no buildings left.”

“As we were talking the second aftershock hit and I knew it because I was watching it on CNN. He said, ‘Oh, no, the world is shaking.’ That was a fairly profound comment. I asked what was happening. I couldn’t hear him because of all the screams and cries.”

Then the line went dead.

As of Jan. 14, DeLand had not heard from Sinsmyr or anyone else from the clinic since the night of Jan. 12. He was hoping to travel to Haiti with a small group of volunteers Jan. 16, as originally planned. They were expecting to have to deal with more than routine medical procedures. (DS)

Sister Mary Finnick, a nurse who directs the Matthew 25 House in the Delmas 33 area of Port-au-Prince, found that “the courage of the Haitian people starts young” when she opened an impromptu triage and treatment center in a nearby soccer field after the quake.

“The children, though crying, did not have temper tantrums and cooperated as much as is possible for a 3-year-old when you make a splint, clean out a head wound and debride backs and legs,” the Grey Nun of the Sacred Heart reported in a Jan. 13 e-mail.

“In all of this, we also hear the Haitian voices raised in song, praising God for being alive,” she added.

Sister Mary said she, two other Matthew 25 staff members, six guests from Pennsylvania and New York, and three Haitian doctors treated 300-400 people in the hours after the magnitude 7 earthquake.

“We began to see some very horrible conditions caused primarily from the cement blocks, which most of the houses are built with, poor and rich alike,” she wrote. “There were many head wounds, some so serious it surprised us the person was still alive. Most were deep wounds that should have been sutured, but we had no material to do that.”

When supplies ran out, “we finally cut up pillowcases for bandages,” Sister Mary reported.

Matthew 25 House, established in 2005 by the Nashville, Tenn.,-based Parish Twinning Program of the Americas, provides hospitality to North Americans who come to Haiti with the twinning program or with other missionary or humanitarian organizations.

Although the downstairs of the house experienced no structural damage, Sister Mary said, the upper floors had more damage and “the wall between us and the neighbor has quite a large hole.” But she encouraged medical teams that had been scheduled to come to Haiti not to change their plans.

“There is a great need for medical supplies, suturing, betadine, analgesics … everything … and personnel to bring it,” she said. (NOB)

“It looks like Dante’s ‘Inferno.’” That’s how Mike Henry, Haiti project director for Cross International Catholic Outreach, described the scene in Port-au-Prince after the quake.

“There are dead bodies everywhere,” Henry said in a Jan. 13 report from the Haitian capital. “It is hell on earth.”

Jim Cavnar, president of the Catholic aid agency based in Pompano Beach, Fla., said the magnitude 7 earthquake “has done more than shake the earth. It has shaken the fragile hopes and dreams of the Haitian people, who just last year were the victims of devastating storms and flooding.”

But even amid the devastation, there were signs of resilience.

“The girls were shaken up quite a bit when it happened,” said an unnamed person who works with Cross Catholic, in a message to Cavnar, “but now they are playing with the kids of the parents who are staying in our home.”