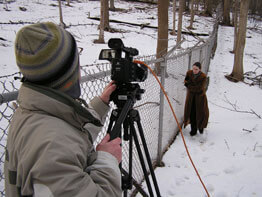 PITTSBURGH – Theirs is the great untold story of modern Europe – the “secret sisters,” who for more than 40 years under communism took their vows, lived out their calling and kept the faith alive, all in isolation and in constant fear of discovery.

The depth of their commitment as part of the underground church will come to life on television screens next year through a documentary in production by NewGroup Media in South Bend, Ind. Titled “Interrupted Lives: Catholic Sisters Under European Communism,” the program is funded in part by the U.S. bishops’ Catholic Communication Campaign.

“What strikes me is that we all know about the Holocaust, which lasted for six years, but what about these 43 years of suffering?” said Sister Margaret Nacke. “No one knows this story.”

She and Sister Mary Savoie, both St. Joseph Sisters of Concordia, Kan., have collected some 3,000 oral histories from sisters in eight countries over the last 15 years. The oral histories formed the basis for the documentary and for “Faces of Faith,” a traveling exhibit they take to religious communities. The exhibit can be viewed online at www.csjkansas.org, under “News.”

“The sisters show what it was to be faithful to the church and God and to continue their ministry wherever they were,” Sister Mary said. The documentary “really tells the story of the Catholic Church under communism and tells how these people are an example for us.”

Their stories are stark, dramatic and very moving, telling of sisters imprisoned in concentration camps, sent to hard labor in Siberia, beaten for teaching and practicing the faith.

Earlier this year, 21 sisters from Slovakia, Hungary, Romania, Ukraine and Poland gathered at the Villa Maria Community Center in Villa Maria, Pa., with some 30 U.S. members of the International Forum for Sisters, formed in the 1990s to respond to the needs of religious communities emerging from the underground.

Sisters in the U.S. have the support of their community, said Sister Dia Stasiuk of the Basilian order in Liviv, Ukraine, while those living under communism “didn’t know who they could trust.”

In the early ‘90s, she said, for the first time since the fall of communism, “the sisters in Ukraine came together, 90 of them, and began recognizing each other. It was ‘Oh, you’re a sister too?’ We knew each other only in small groups, and only by first names, for safety.”

The sisters could not even tell their own families of their vocations, for fear of endangering them.

Sister Terez Muranyi took her first vows in secret in 1977 in Romania, as an Eastern Catholic member of the Sisters of Social Service.

“My family did not know anything till 1993,” she said. When the news reached her mother, “she was very happy,” Sister Terez said. “She wanted to become a nun when she was young and was happy that I continued her vocation. I was so happy to invite my parents to my 25th.”

Sister Paula Cicos of the Mother of God Sisters in Romania had been a sister for six years, living at home and working in a biological research lab. Approaching her final vows, she told her parents.

“They cried a lot,” she said. “It was not easy. They came with me in secret to a house as I took my vows. They gave me a blessing, crying.”

The U.S. sisters at the Villa Maria meeting were among more than 200 who helped their East and Central European counterparts by establishing pastoral centers, updating libraries, teaching English and hosting leadership workshops.