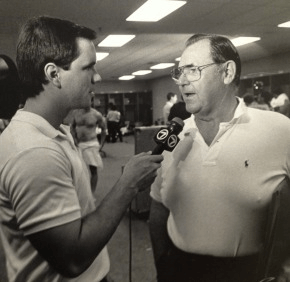 By Paul McMullen
pmcmullen@CatholicReview.org
Twitter@ReviewMcMullen
Gerry Sandusky, the sports director at WBAL-TV and radio play-by-play voice of the Baltimore Ravens, will give the keynote address at an annual conference sponsored by the Alzheimer’s Association Greater Maryland Chapter April 25 in Towson.
In his new book, “Forgotten Sundays, A Son’s Story of Life, Loss and Love from the Sidelines of the NFL,” Sandusky, 52, writes about the deaths of a brother and his mother, and being erroneously linked to a notorious college coach with a similar name, all through the prism of growing up in a football household and his relationship with his father.
John Sandusky was an assistant coach on two Baltimore Colts’ teams that won NFL titles, then their head coach briefly in 1972. A devout Catholic, he played collegiately for Villanova University in his native Philadelphia and met his second wife through his church in Miami. He suffered with Alzheimer’s, and died in 2006.
Gerry Sandusky, who began his schooling at Immaculate Heart of Mary in Baynesville but is no longer a practicing Catholic, talked to the Catholic Review about coping with a parent with Alzheimer’s.
Condensed from a recorded interview.
Q. Many people deal with the mental deterioration of a parent. Were you prepared for your father’s?
A. There’s nothing that can prepare you for that. I went through a hip replacement with my father. It was almost an invasion of privacy for him, that I had to do certain things for him that he wasn’t proud of, and we didn’t speak about it. That was what you did for your father, and he appreciated it, but there was a physical solution to a physical ailment.
For my father, Alzheimer’s came on shortly after he learned he could no longer (physically) coach a high school football team. Within a matter of months, he started showing signs of dementia and Alzheimer’s. There seems to be a disruptive event in their lives, which creates a separation between their former identity and self, their sense of purpose. When that’s disrupted, taken away, it’s not a coincidence that Alzheimer’s seems to follow.
As a society, we continue to hope that there will be a pill, a prescription, a medical solution to this problem the way we pursue a hip replacement and a knee replacement. I don’t want to diminish the medical aspect, but to me Alzheimer’s is a physiological manifestation of a spiritual condition.
Q. What advice do you give when the mental and spiritual essence of a parent isn’t there anymore?
A. I would advise them to flip that equation, and understand that the spiritual dimension is still there. It’s the physical dimension that is now challenged. It’s like your computer, when its memory starts to fail. It’s the breakdown of the physiological, but the spiritual is still there. When you believe in the eternal nature of relationship, it transcends the physiological breakdown.
As I was going through this with my father, and I hit that awful experience of, “He doesn’t know who I am,” I held onto the idea that he doesn’t know who I am in his mind, but a man who had that level of faith, still knows who I am in his heart, in his soul. We don’t speak in words through our heart and our soul, but we still communicate and will forever.

Q. What got you through the ordeal?
A. Having lost my brother and my mother, having had those experiences, which we don’t wish on anybody, but if you’ve gone through them, and you haven’t grown from them, then that’s the definition of a tragedy, a true waste. Having survived that with them, and having to find my own way. My father was devoutly Catholic. You would not meet a man who had more belief in the Catholic Church than my father. … He believed in his faith, and I borrowed from that. It’s about holding onto something higher than yourself.
Q. Why did you embrace this cause?
A. When you go through Alzheimer’s with someone you love … I had really gotten to know my father as a man. We were at that intersection of understanding each other, then he forgot everything. At the end of his life, he didn’t even know who I was. How do you go through all of this, and there is seemingly nothing at the end? A relationship is temporary, but it’s eternal. It’s temporary in the physiological aspect of the time you get to spend with your father, the time your two eyes and his two eyes can connect and there can be a point of recognition. It’s eternal in that your name is a stewardship, like everything else in life.
Q. Can you elaborate on the juxtaposition of being a steward of your father’s name in light of being confused with Jerry Sandusky, the former Penn State assistant who is doing a lengthy prison sentence for his crimes of pedophilia?
A. When that broke, I fully understood the confusion people had. Jerry Sandusky was a football coach, my Dad was a football coach. I understand why so many people, through social media, invited me to spend eternity in hell. I was so frequently asked, why I wouldn’t change my name? (ESPN’s) Rick Reilly did a story, said he talked to a number of network executives who said I was good enough to do play-by-play at the network level, but I would have to change my name to have a shot to do that. He asked, “What does that mean to you?” Well, it means I won’t be doing play-by-play at the network level. I’m not going to change my name, just because it’s challenged.
Life, when it presents your greatest challenges, that’s when you find out what you stand for. It’s not just what you’re willing to do to succeed, it’s what you’re not willing to do that defines success on your terms. My father gave the greatest gift a father could ever give his son, a good name. I’m going do the same thing for my kids. It might be a little harder than I originally thought it was going to be, but I can’t give them the same gift my father gave me if I change my name. Jerry Sandusky’s day in the spotlight was searing and it lasted a long time, but it’s gone away. It’s up to me to take stewardship of this name and weather it. The name has some gashes and scars and bumps and bruises, but isn’t that what life really is? Life isn’t about getting to the end of the journey and having your (name) in bubble wrap, untouched. It’s about having your name being strong enough to endure all the hits, then hand it off to the next generation.
For more information about the Alzheimer’s Association Making Connections event or to register, visit http://conta.cc/1gqhpuu, call 410.561.9099 x222 or email jsample@alz.org.
Also see:
Chrism Mass shows church ‘at its best’
Killings at Jewish Community Center mourned; Catholic woman among dead
Cancer patient gives up fear for Lent
PrevNext