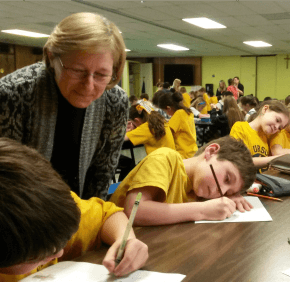 PARKVILLE – Joy is evident in the Conway home, figuratively and literally.

The word appears in lights, on wallpaper border, and in the work of artists, professional and very young amateur. Christmas means a scavenger hunt for “Joy,” 17 grandchildren counting the dozens of times it can be found in the Cape Cod in which Carolyn and Larry Conway have made their home since 1962.

It’s a pleasant stroll to St. Ursula Parish. Not a decade has passed since its school opened in 1941 without Carolyn or one of their children or grandchildren in one of its classrooms.

On the school’s south side stands a statue of a religious woman, flanked by two schoolchildren. It honors the foundress of the order that operated the school, and two absent graduates.

Michele Anne Conway, class of 1981, was 17 when she died of melanoma four years later. Her brother, Jeffrey, ‘89, was 35 when a brain tumor took his life.

Carolyn and Larry Conway, parishioners of St. Ursula in Parkville, hold pictures of their children, Michele and Jeffrey, who died at ages 17 and 35, respectively. (Kevin J. Parks/CR Staff)

“After Michele died,” Carolyn recalls, “I thought, ‘I don’t ever think I’ll ever feel joy again,’ because I’ve got this whole crack in my heart. But then I looked at these other kids. They make you keep going. So I adopted the word joy. It keeps us going.

“I never knew what it meant until someone sent a card, it said, ‘Jesus, Others, and Yourself.’ We’ve got to find joy in all these children and grandchildren, which we do.”

They have shared that joy with their parish and school community, which has reciprocated.

“When our youngest was born,” Carolyn said of her seventh, “we decided to call her Julie, because I had heard that name all my life.”

Carolyn Hefner Conway was in the class of 1955 at St. Ursula School, which was staffed for much of its existence by the Sisters of Notre Dame de Namur, who were founded in 1809 by St. Julie Billiart.

If Carolyn and Larry weren’t taking their kids camping or to Ocean City, they could be found at St. Ursula, helping at school or church, where they remain 11 a.m. Sunday Mass landmarks.

“Third bench, Blessed Mother side, that’s where you’ll find Carolyn,” said Sister of Notre Dame de Namur Joan Kelly. “Larry will be in the back. He’s been our head usher as long as I can remember.”

Now a pastoral associate, Sister Joan was principal of St. Ursula School for 28 years. When she got there in 1986, the Conways had already dealt with a parent’s worst possible nightmare.

Like her sisters, Michele went from St. Ursula to the Institute of Notre Dame.

“She was artistic and soft-spoken, and had a very clear idea of what she wanted to do,” said Jennifer Peach Selcho, a fellow member of the IND class of 1985, which began a scholarship in Michele’s name at their 20th reunion. “She wanted to be a mom, and have kids.”

She also would “dance until her toes bled,” according to Selcho, and create poetry, enough to fill “My Life Has Made a Difference Just the Same,” a 51-page pamphlet that Catholic Review columnist Father Joseph Breighner helped publish in her honor in 1991.

“For a couple of years,” their mother said, “he was afraid to mention his birthday, because I would cry.”

Michele died at home, in a bedroom that has been turned into a playful – no, joyous – place, its décor including a painted tree that grows up one wall and on to the ceiling.

Jeffrey spread his own branches, graduating from Calvert Hall College High School in Towson, then studying the classics at Xavier University in Cincinnati. He returned home to become office manager of a highway construction firm, and his volunteer work included being on the board of St. Ursula School.

“Did his parents mention that?” asked Sister Joan.

As voracious a reader as his sister, Jeffrey’s response to minor annoyances and major emergencies alike was, “It’s all good.” He was the favorite uncle of his nieces and nephews, including Noah Matthews, a sophomore at Archbishop Curley High School, who has autism.

It was a year between Jeffrey’s terminal diagnosis and his death in 2010. As Monsignor James P. Farmer, then pastor of St. Ursula, celebrated Mass at Jeffrey’s bedside near the end, Noah asked for all to hear, “Is this almost over?”

“Their faith,” Monsignor Farmer said of the Conways, “is something I cherish. You wonder how people get that good. They know they’re going to be reunited with their children one day. They understand the big picture, that we’re all destined for heaven.”

As part of its 75th anniversary, to honor the Sisters of Notre Dame de Namur who had served there, St. Ursula School made plans to erect a statue of St. Julie Billiart, and include the likenesses of two former students. A fundraising auction would determine the honorees.

At the 2014 Autumn Festival, in the school hall where they had celebrated their 50th wedding anniversary, feasting on favorite dishes prepared by Jeffrey, Carolyn and Larry Conway found themselves in a bidding war.

After Angela and Julie, the oldest and youngest, respectively, had called on family and friends to pool their resources, Larry won the bidding for the boy’s likeness. Carolyn’s bidding for the girl’s ran into opposition, until veteran St. Ursula teachers such as Nancy Culotta and Rose Folio spread word of their cause.

“Two words describe the Conways, faith and family,” said Culotta, in her 35th year at the school.

Folio, who is in her 36th year at St. Ursula, said she always said the Conways at Grandparents Day, and that “it was just so important” that the auction go their way.

One man held out, until his wife grasped the situation and said to stop.

“I don’t even know their names,” said Carolyn, who gave the wife “the biggest hug ever.”

“My favorite of the Trinity is the Holy Spirit, he’s my sneaky friend,” he said. “He doesn’t do anything except get other people and put them in your path to do good.”

So it was that St. Ursula School raised nearly $3,000 and erected a statue just south of the whir of Beltway traffic, where St. Julie Billiart stands, her right hand on Michele Conway, her left on Jeffrey Conway.

“The thing that affects us the most,” their mother said, “is that they’re remembered.”

Cameron Rogers, a rising senior at Hood College and summer intern with the Catholic Review, contributed to this article.

Eucharistic adoration is in trouble at the Baltimore Basilica