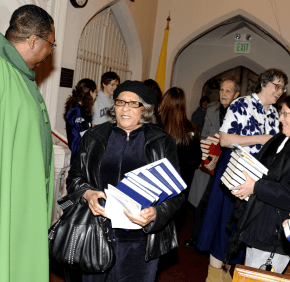 Nearly two years ago, St. William of York in Baltimore faced one of the most significant transitions of its nearly 100 years of existence. Its pastor of 14 years was reassigned, the school closed and the small faith community began sharing its new pastor with nearby St. Agnes in Catonsville.

While many experienced a sense of loss, the changes have presented an opportunity for renewal – one that parish leaders are embracing as way of evangelizing and reaching out to the wider community.

“I give two thumbs up to the staff,” said Father Michael DeAscanis, pastor of St. William and St. Agnes. “The parish has come through it brilliantly.”

One of the benefits of linking the two parishes, Father DeAscanis said, is that there are more facilities to share. Between the two communities are two churches, two gymnasiums, three stages and plenty of parking.

“We started to realize the opportunities that gives us,” the pastor said. “We know the drawbacks, but we’re learning the benefits. There’s a lot of life in this transition.”

As an example, Father DeAscanis said a liturgy might be held at one church, with a reception at the other. The ChristLife evangelization program is offered through both parishes. Youth ministry has also benefited, with St. William becoming a hub of activity for many parishes in the area – hosting service camps for middle- and high-school students, movie nights, discussion series and more.

This summer, St. William will provide its facilities for an arts camp offered by St. Agnes School. Part of the former St. William School is now home to a Head Start program. St. William is also home to a Tridentine weekday Mass every Thursday.

With changing demographics in the city, the number of parishioners has fallen significantly in the last several decades. At its peak in the 1960s, St. William had more than 4,200 parishioners. Today, there are 150 registered families. Parish leaders view the small size as a strength since it fosters a sense of family.

“Parishioners are very friendly and very hospitable,” said Pat Adams, St. William’s secretary. “We open up the church daily for anyone who would like to stop in and pray.”

Father DeAscanis noted that the parish may see some new faces with the anticipated construction of new homes in the area. St. William is “very intentional” about helping parishioners get to know one another, he said. There’s a sense of welcome, according to Peggy Mrozek, coordinator of religious education.

“The evangelization team sends out care packages to the college kids just to keep them engaged so that when they are back in town, they’ll stop by and still feel that connection with the parish,” Mrozek said.

Parishioners volunteer to help the Franciscan Center in Baltimore with a monthly food collection. They also support the outreach of the Forty West Assistance Center and Pregnancy Center West. Parishioners joined members of a neighboring non-Catholic church in traveling to Annapolis Jan. 30 to rally in support of traditional marriage.

Modeled after an English church, St. William was founded as a memorial to William and Catherine Lanahan. William Lanahan was a prominent Baltimore businessman who died in 1912. His widow donated the funds for the construction of the church in 1914. Both are buried in the north alcove at the back of St. William’s nave.