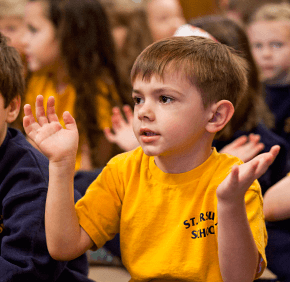 By Elizabeth Lowe
elowe@CatholicReview.org
Twitter: @ReviewLowe
PARKVILLE – Lily Avil and her peers had to stand on a stepstool to see over a lectern in St. Ursula’s convent chapel.
Six-year-old Lily and 52 fellow kindergartners at the parish school participated in a class Mass Dec. 13, celebrated by Father Stephen E. Hook, pastor of St. Ursula Parish.
Father Hook explained each part of the liturgy to the pint-sized students, who sat on the floor during his homily.
“What are we supposed to do while we wait for Jesus?” Father Hook asked.
Give food to the poor, be nice to other people and pray, some students responded.
As the bread and wine were presented, Father Hook said “these are the gifts we are offering to God. They’re very simple gifts.”
Before he consecrated the bread and wine, Father Hook said “we have certain prayers we say. They’re really special prayers.”
After Communion, Father Hook explained that he was cleaning up.
“Father Steve has to do the dishes,” he said. “After we have everything cleaned up, we have a closing prayer.”
Following Mass, there was eucharistic adoration. Father Hook explained to the students the purpose of the monstrance, an exposition case and stand, and the importance of adoration.
“This is always a very special time,” Father Hook said. “We believe we’re in the presence of Jesus.”
Students then spent a few minutes praying, some with their eyes closed, heads bowed and hands folded.
“I hope you learned something today,” said Father Hook, who later added that when it comes to youths, “I try to do more explaining. It’s good they got excited.”
Lily, a kindergartner, said learning about the monstrance was “cool.”
Sister of Notre Dame de Namur Joan Kelly, principal of St. Ursula, said there are school and class Masses each month.
“It’s good if they can keep that excitement,” Sister Joan said.
The Mass “was very meaningful to them (students),” kindergarten teacher Theresa Fifer told Father Hook.
Copyright (c) Dec. 14, 2012 CatholicReview.org
PrevNext